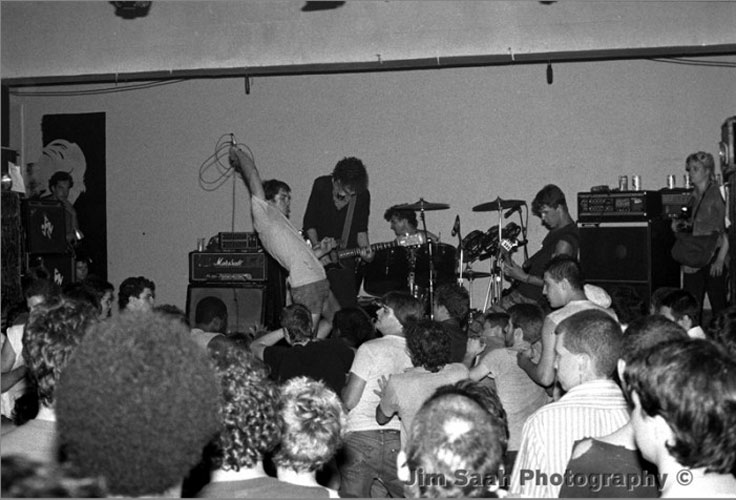 Chris Stover was the bass player for Void, probably the most matchless of bands to come from the early 80’s Washington D.C Hardcore Punk scene. While their D.C peers such as Minor Threat and the Bad Brains were well tuned machines fueled on precision, Void were a consciously unhinged mess running on the fumes of their Hendrix-meets-Greg Ginn guitarist, Bubba Dupree.

We caught up with Chris recently to talk about growing up a punk in his native Maryland, Void’s Heavy Metal tinged sound and the myths that surround the bands’ scarce but legendary live shows.

WHAT WAS IT ABOUT THAT INITIAL D.C. HARDCORE SCENE THAT MADE YOU WANT TO START VOID?

Chris Stover: We saw the energy and camaraderie and knew we wanted to be a part of it. At the same time, I don’t think any of us wanted to be bystanders. If it was a reason to leave Columbia, then even better.

WHAT ABOUT HARDCORE APPEALED TO YOU BESIDES THE MUSIC?

After the music, it was probably the skateboarding. I had multiple ramps at my house, so it was cool to check out other skate spots, as well as have people come skate at my house. We would mix it up by going to shows after a skate session usually. Or during the show. Or after the show. It was empowering in a sense you were with a group of people with similar interests. Those interests being rare in Columbia.

VOID WERE AND CONTINUE TO BE A PRETTY POLARIZING BAND SONICALLY. YOU EITHER LOVE THEM OR YOU DON’T. WAS THAT THE INTENTION?

The intention was to be full on. We wanted to be loud and hard as possible. When we got on stage, I don’t think we cared whether we were loved or not.

DID ANY OF YOU GO UP WITH THE REST OF THE D.C. HARDCORE CREW WHEN THEY MADE THAT INFAMOUS TRIP UP TO NEW YORK FOR WHEN FEAR PLAYED ON SATURDAY NIGHT LIVE?

Yes, our drummer Sean and I went up. So many stories! Meeting John Belushi. Our friend Bill McKenzie throwing the pumpkins at the end of the Fear set which leads to a pumpkin piece battle with the audience. Me getting a reverse mohawk that only lasted through the sound check. Sean and I raiding the catered food table while Eddie Murphy looked on. Hanging with the Necros and the Maumee, Ohio crew.

HOW DIFFICULT WAS IT TO BE A YOUNG PUNK ROCKER IN MARYLAND IN THE EARLY 80S?

We got picked on, sure. Sean, John and I went to an all boys catholic high school. Our freshman year we were school kids. Sophomore year, things changed. You had your stoners, geeks, and jocks. We were a new sect at the school. Some people scratched their heads. Some tried to communicate with violence. That did not end so well for them.

VOID ARE KNOWN AS A BAND WHO BROUGHT METAL IN PRETTY EARLY ON INTO HARDCORE, BUT WITH THEIR OWN SPIN ON IT. HOW WAS THAT TAKEN AT THE TIME?

People were pretty positive about it. We were just putting out our influences. The Bad Brains were a huge influence on us. I think we tried to accentuate more of their heaviness. VOID ARE A BAND WHO HAVE A LOT OF MYSTIQUE FLOATING AROUND THEM IN REGARDS TO THEIR LIVE SHOWS. THERE ARE STORIES OF ON-STAGE INJURIES, HAVING TO BE PICKED UP FROM OUT OF STATE PROMOTERS AND DRIVEN TO THE GIGS. WHICH ARE TRUE AND WHICH ARE FALSE?

The one false thing I will call out is that we did not practice. We practiced two or four times a week. We looked to how tight Minor Threat, Faith, or Bad Brains, amongst others and tried to keep it that cohesive at the show. You do what you can when you are giving it all, especially when you have throngs of people around you stage diving, moshing, and what have you.

John tore his ACL third or fourth song into a set in New York City. I’m not sure of any other show stopping injuries. Reed Mullin from Corrosion Of Conformity drove from North Carolina to pick us up in Columbia. We played and he drove us back the next day. We had to cancel one show because Bubba was grounded. I think that covers all the rumors that are out there.