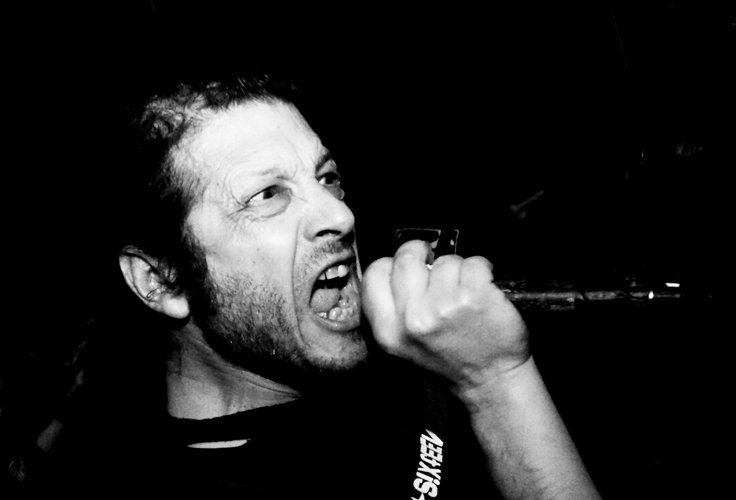 Keith Morris is the ball of energy that co-founded Black Flag in 1976 and then fronted the Circle Jerks from 1980 through 1995. Now the man behind that quintessential Southern California voice leads Off! with guitarist Dimitri Coats (Burning Brides), bassist Steven Shane MacDonald (Red Kross) and drummer Mario Rubalcaba (RFTC, Hot Snakes, etc.) Virtually a walking LA music historian, the guy is full of tales he tells with the ease of a punk rock Scheherazade—stories which will thankfully be preserved in his forthcoming memoir, “My Damage: 40 Years on the Front Lines of Punk” (DaCapo Press, written with Jim Ruland).

Here are a few unforgettable moments from punk rock’s most charismatic frontman.

HOW ARE YOU TODAY?

Bummed because of David Bowie. The Man Who Sold the World album I consider to be his best. Ziggy Stardust is also an amazing album but I love that one for its heaviness, granted some of the stuff he’s singing about is kind of weird, for some back then would have been a bit odd. That was leading up to his glam period.

I’m really fortunate that I saw him as many times as I saw him. He was a musical hero. The last I saw him perform I think was the Glass Spiders tour with Iggy at the Santa Monica Civic, and I’ll never forget them starting with “Lust for Life,” with that drum beat and everybody just started to pound away like some African thing.

He was also in the audience at a Black Flag show in Chinatown. As friendly and personable as he is… apparently he knew what he was getting into going to the Hong Kong Café at that time—it could get outta hand. He had a couple of guys that looked like very well-dressed USC offensive linemen with him. And there weren’t a lot of people there—maybe a couple of dozen. It was a Monday or Tuesday night. Maybe he just needed to go out. Or maybe he’d heard of us? Or maybe he went through the music listing in the LA Times or Weekly and his fingered landed on ‘Black Flag at the Hong Kong Café in Chinatown’ and was thinking of China Girl or who knows?

FUN TO IMAGINE! THAT WAS DEFINITELY A WEIRD ONE FOR BLACK FLAG, HUH? ANY BAD SHOWS?

When we were scrambling to play anywhere we could, we played a basement under the flight path of LAX over in Inglewood/Hawthorn. I remember the floor was checkerboard. Some of these details I’ll never forget because that was the night my life could have ended.

Normally when you have a keg, you have it in a metal container filled with ice to keep the beer cold. Nobody wants to drink beer out of a hot keg. So, the room was so warm that the ice in the container had melted and spilled over the sides. All of a sudden there’s a river of water and it’s running toward the stage and for some reason there’s a little dip in the floor, right where I’m standing! The water has accumulated and normally because of our attack, we all just kind of lunged into the music, and I reached to grab the mic, and all of a sudden the room was this big flash of white, like a white-out—like grit your teeth and the charge runs through you.

People ask ‘what do you see when you’re getting ready to die?’ and it was pretty bright. It wasn’t like a black cave or a tunnel with light at the end—just a flash.

I’ve actually had that happen a couple of times—once at DC at the 9:30 Club—but not because of electrocution. I had another flash happen. I think it was more that I had been partying so much and maybe it was a blackout. I ended up picking myself up from between the kick-drum and cymbal stands and my back was sore. For some reason I was able to jump up and continue the song. Don’t know how many lines I missed.

Also The Circle Jerks played a show with DOA at a movie theater in Sacramento and somebody jumped onstage and came running and maybe they were trying to break my jaw but they kneed me in the nose. This could have been my cocaine period because I remember I didn’t feel anything. I felt immortal like you could try to shoot me and wouldn’t kill me. When you play music and getting into athletic mode, all of the blood and adrenaline is flowing. I had a bloody nose but it wasn’t gathering below my nose into my mouth. It was squirting like if you were watering your lawn with sprinklers. I had blood spurting and Greg Hetson pointed at me between songs he said, “dude, your nose! Your nose!” So I reached up and grabbed by nose and popped it back into place. I’M SURE YOU’VE BEEN BEATEN UP A LOT ON STAGE.

I’ve been kicked in the jaw, kicked in the cheek, kicked with a steel-toe boot, had my nose broken two nights in a row on a tour that started in Texas.

Another weird scenario was Circle Jerks played a show in West LA at a place called The Music Machine. These were times when they would put four or five bands on a show and it wasn’t all punk rock or rockabilly or blues. The opening band was Spinal Tap doing their heavy metal parody, and they were excellent. Then Slayer played. Slayer and us is kind of keeping with the spirit. We played after Slayer and our line-up at the time was Chuck Biscuits playing drums—you don’t want to get in his way when he’s playing because he’ll just end up breaking your head in half with one of the tree trunks he uses as a drumstick. But we also had Flea playing bass. We’re talking about a younger Flea who was feeling the vibe. He was still doin the Chili Peppers but they hadn’t come close to taking off. The situation was that people were scared of us. Greg and I are just a couple of shrimps. We’re not the guys who were puffing our chests and being macho because we’d get our asses handed to us. So we played and the people in the crowd didn’t even know what to say.

It was one of the nights where when you play you’re in a zone and nothing can go wrong. Afterwards we’re hanging out backstage and my friend Jeffrey Lee Pierce comes up and says, “I’ve never witnessed anything like that. That was fucking crazy.” The John Doe came up to me—we were all drinking buddies—they were there, too, because the Blasters were the headlining band—and he says “that was nuts, I don’t know how you did that.” It was a line of people coming up. The next one was Dave Alvin from The Blasters and he looked at me and was kind of angry, like “how could you do that?” It was The Blasters, who were one of the greatest bands of all time!

WAS SLAYER STILL A LOCAL BAND AT THAT TIME OR WERE THEY ALREADY BIG?

Slayer had probably been together maybe a year. They were great. I love Slayer. You’d see them show up at shows wearing Black Flag or Black Sabbath or Circle Jerks shirts. Jeff Hanneman always was wearing a Dead Kennedys or Suicidal Tendencies shirt.

MY HUSBAND AND I MET AT A SLAYER SHOW.

Ok. Blame it on Dave Lombardo.

WE ASKED THEM TO PLAY OUR WEDDING BUT THEY SAID THEY DIDN’T DO WEDDINGS.

They should have. Circle Jerks played a wedding and it was crazy.

It was at a golf course.