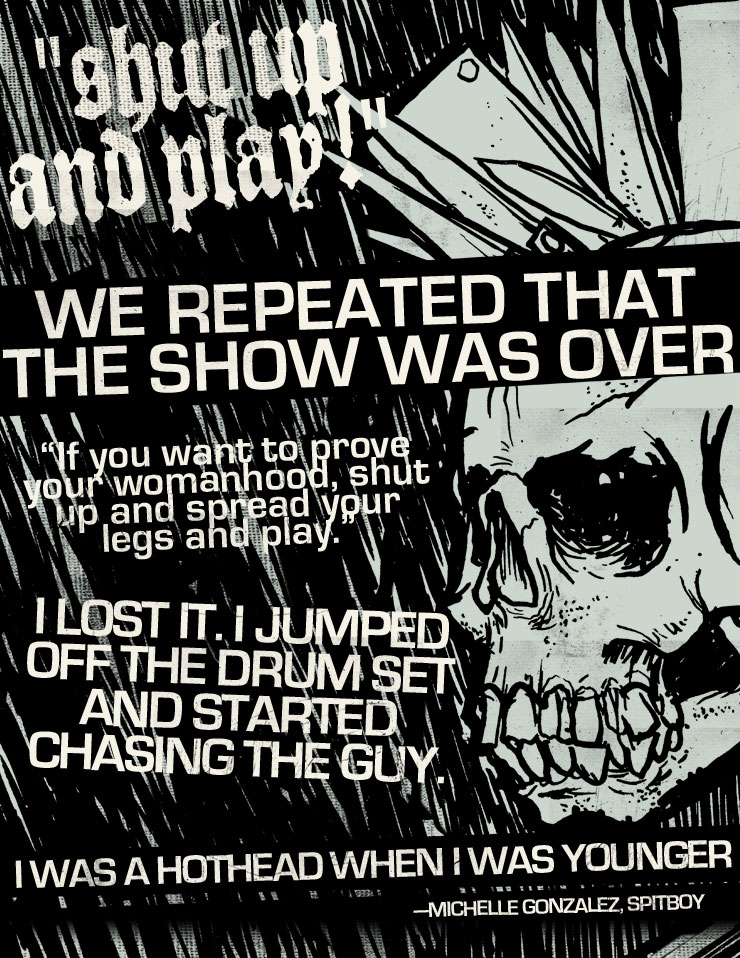 Michelle Gonzalez recalls a notorious gig with Spitboy in an Albuquerque basement.

“As all women in the band, there were certain kinds of shows that always made us nervous, and right away when we got there we said ‘shoot, it’s that kind of show.’ We faced a threat that people in other bands didn’t have to worry about. We roll up and were like great, a bunch of drunk dudes who just want to mosh really hard. That was the worst kind of show for Spitboy—no restrictions on alcohol—we mostly played all ages shows but a lot of times meant no drinking and also safer for us.

A band played before us and guys were moshing hard in the pit. There was fight so we stopped and this one guy’s nose was bleeding everywhere. He says “just play, just play!” He’s shaken up his beer and then opened it and beer just sprayed all over Adrienne’s face. We were like ‘oh my god, this is horrible.’ Then we started playing another song and Jessie said ‘you have to stop playing. It’s going to get too violent. People are going to get hurt.’ So we tell the crowd we can’t play anymore and this from the back says, “shut up and play!” We repeated that the show was over. Then he says, “If you want to prove your womanhood, shut up and spread your legs and play.” I lost it. I jumped off the drum set and started chasing the guy. The guys from Paxton Quigley grabbed me and stopped me. The guitar player said in my ear, “Don’t mess with that guy. We heard earlier that he was on America’s Most Wanted.” Not that I could have beat him up but I was a hothead when I was younger.”

As told to Shawna Kenney