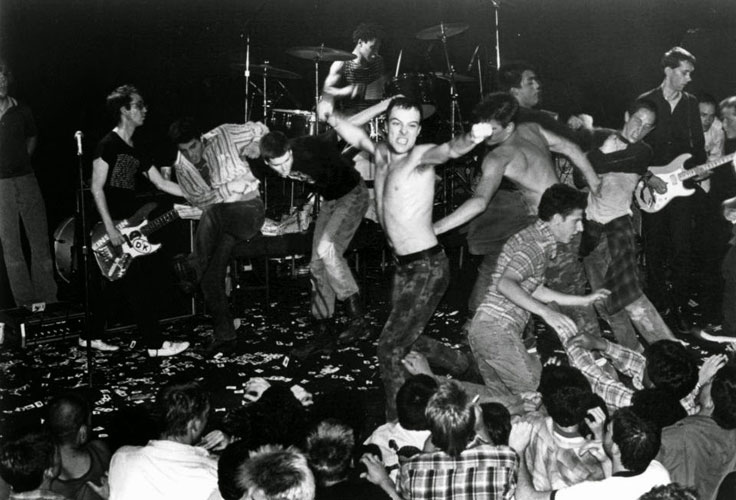 So what was the big deal about hardcore punk rock? How did a crazy scene of violent, frustrated teenagers in the 1980s forever change the face of music?

Hardcore punk, now also known as American hardcore, was the suburban American response to the late-’70s urban punk rock movement. But while hardcore grew out of punk, it would be wrong to say, “If you understand punk, you understand hardcore.”

The typical hardcore candidate in 1980 listened to hard-hitting British punk groups such as 999, Angelic Upstarts and Sham 69, as well as the domestic sounds of the Ramones and the Germs. Such kids adopted the Ramones’ NYC style of loud high-speed music, T-shirt-and-jeans image and no-bullshit attitude. The Germs, from Los Angeles, was the first punk band to drive its music in a manic direction; their anarchic frontman, Darby Crash (Jan Paul Beahm), was like America’s Sid Vicious. These punk bands had an unruly edge, but Reagan-era kids demanded something even more primal and immediate, with speed and aggression as the starting point. Hardcore extended, mimicked or reacted to punk; it appropriated some aspects yet discarded others. At the time, the music industry started promoting offbeat punk-style radio-friendly bands as “New Wave.” Hardcore kids reaffirmed punk’s fury and attitude, and rejected New Wave’s art-school baggage. That’s why it was hard-core punk—for a new generation of extreme, disaffected kids. The seeds of a youth subculture were sown.

Hardcore was attractive because it implied danger and dabbled in bad shit. In the scene’s testosterone-driven competitive milieu, everyone spoke of unity but it all dripped with division, rivalry and conflict. You knew someone was into hardcore if they had a shaved head or a crew cut, a threatening demeanor and a hatred of all things mainstream. The few girls into hardcore appeared harsh and unfriendly.

The first hardcore bands came out of Southern California beach towns like Venice Beach, Huntington Beach and Long Beach, probably because they lived as close to The American Dream as one could get. Born of a doomed ideal of middle-class utopia, punk juiced their nihilism.

Hardcore and skateboarding went together—both were antiestablishment and born of repressed Southern California youth culture. The ascent of Thrasher magazine, with its Pushead-penned columns and Glen E. Friedman photos, portended all notions of modern extreme sports. The rock-show ritual of slam-dancing and stage-diving also began in the sterile suburbs of Los Angeles. As per scene lore, Mike Marine, a former U.S. Marine and star of Penelope Spheeris’ influential film The Decline Of Western Civilization, performed the first ritual slam dance in 1979. He created a brutal punk version of “The Surfer Stomp,” smashing the face of anyone who’d get near him—especially some longhair, who’d get pulverized. Kids called it “The Huntington Beach Strut” or “The HB Strut”—strutting around in a circle, swinging your arms and hitting everyone within reach. Stage-diving began as a result of crazy jumps perfected into local backyard pools or the Pacific Ocean.

Hardcore’s pioneers changed how and why music got made. Dead Kennedys singer Jello Biafra incited young minds with his firebrand Bay Area politics and ardent support of new bands and local scenes. Black Flag guitarist Greg Ginn founded SST Records, the DIY label behind the early vinyl of Minutemen, Hüsker Dü, Meat Puppets and Sonic Youth. Washington, D.C.’s Ian MacKaye followed SST’s lead with his upstart Dischord label, and then upped the subcultural ante fronting Minor Threat with the song “Straight Edge” that inspired the same-named anti-drug movement. Ian’s best friend, Henry Rollins (Garfield), auditioned to replace Dez Cadena as Black Flag’s frontman and moved to suburban L.A., where he developed his malevolent blend of brawn and brains. Glenn Danzig of Lodi, New Jersey, band the Misfits, while unique in this stark underground scene with his profound sense of melody and panache, may have been the scene’s most influential musical force in terms of the direction of modern punk and metal. Hardcore was the first music scene for today’s iconic rock stars, from the Beastie Boys and Red Hot Chili Peppers to Dave Grohl and the late, great Kurt Cobain. The scene tapped into the zeitgeist of a few key kids at the time. It spread like wildfire across the nation to like-minded young fans and aspiring musicians through independent records, supportive “fanzines” and occasional major events—such as Fear’s infamous Halloween 1981 Saturday Night Live performance or September 1983’s “Funk-Punk Spectacular” with Trouble Funk, Minor Threat and the Big Boys, which drew over 3,000 HC fans from hundreds of miles away—but mainly through the groundbreaking tours of low-tech groups like Dead Kennedys, Black Flag, Circle Jerks and the Bad Brains. Such bands’ incredible energy and hard-nosed ideals forever transformed the music industry. Back in the day, rock music was all about poufy hair, guitar solos and stoned-out crowds paying homage to “geniuses” onstage. Hardcore espoused shaved heads, tattoos and the breaking down of all barriers.

Today, tinges of hardcore can be found throughout our culture. And not just all the gnarly stage-diving and slam-dancing and intimidating shaved heads and tattoos, and loud, fast, guitar-solo-less ferocious, intimidating sounds that came to define modern rock music. Take a look at all the respect-worthy bands of today; they stand apart from the pop machine. They make their own intense art and are willing to go it alone or do it themselves. That’s the fierce artistic legacy of the ’80s hardcore punk subculture.