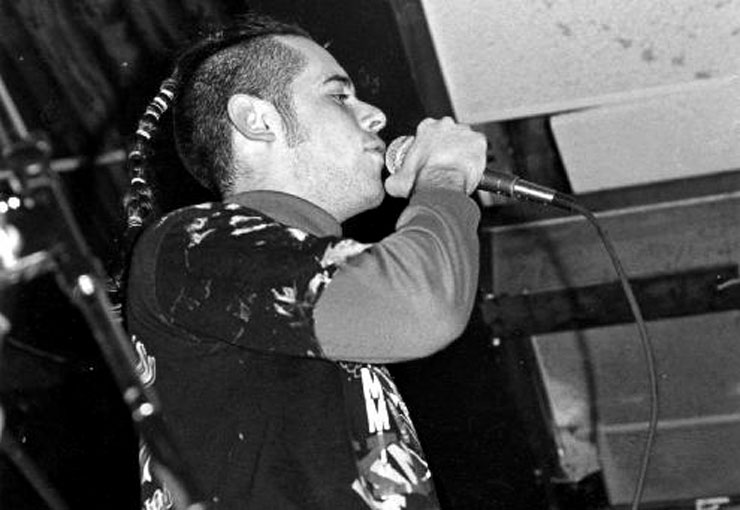 The Bouncing Souls have created a legacy few other bands could claim, making new music and touring consistently for 28 years, with singer Greg Attonito leading the charge. Between Souls tours lately, Greg’s been one-half of the award-winning kiddie-rock group Play Date, performing with his wife Shanti Wintergate. Turns out that rocking in backyards and zoos and the likes of the Brooklyn Library may not be so different than clubs and festivals after all.

IT SEEMS YOU’VE BEEN VERY ACTIVE WITH YOUR VISUAL ART LATELY—THE “STONE PONY” MURAL AND THE ONE ON HOGGITOS, NOT TO MENTION YOUR CUSTOM PAINTINGS AND DRAWINGS. HAVE YOU ALWAYS BEEN A VISUAL ARTIST AS WELL AS VOCAL, OR HOW DID THIS COME ABOUT?

Our house was full of watercolor paintings my mother did when I was growing up, so I was dabbling with painting and drawing from as early as I can remember. To go a few steps deeper than choice of artistic medium, though, I believe an artist is someone who has something inside they have to say or “get out,” and their art is a by-product of the effort they put in to saying their own special something. Expressing myself is a never-ending journey that keeps expanding regardless of medium, so the visual art is just an extension of my songwriting and live performance. To put it more simply: It’s an energy inside I’m compelled to get out into the world in any way I can. I think having more time off the road for the past few years has allowed me some space for the visual art to come through. I WAS JUST READING A BOOK CALLED BIG MAGIC: CREATIVE LIVING BEYOND FEAR. YOU SEEM TO FEARLESSLY CREATE. IS IT EVER SCARY FOR YOU SHARING A NEW SONG OR SHOWING NEW WORK?

Sharing a new creation with the world is always scary on varying levels and I think it should be … that’s part of the excitement of it. I can always count on my mind to come up with a million reasons not to do something, but I think the more I break through those blocks, create and output into the world, the more I can improve in the quality and the confidence in what I’m doing. I’m lucky to have been pretty well-received by the world from the beginning, so I admire artists who keep plugging away without having a whole lot of acknowledgement from the “world.”

For anyone who is just starting out sharing their creations, I say: Don’t let fear stop you from creating or sharing your creations. It’s worthwhile to put yourself out there. You will always learn something about yourself. In that process, you always gain some new valuable experience, strength and usually various surprises you never expected. THE BOUNCING SOULS HAVE TOURED EXTENSIVELY. CAN YOU SHARE ONE OR TWO OF THE WORST GIGS YOU’VE EVER EXPERIENCED?

There has definitely been more than one “worst gigs” ever, but I think a standout one was when I got attacked by a dog on stage. I think it was a pit bull.

We were playing a squat in Germany sometime in the ’90s. The venue was connected to an old partially redone World War II barracks that was being repurposed for all kinds of things. People had living spaces going on in the various old structures. The whole place felt kind of post-apocalyptic, and it sort of felt like the war had just ended the week before. There were dogs running around freely in the bar during the show, which was kind of unsettling, but nothing bad happened until I actually stepped on the stage and started saying “hello” into the microphone. Just as I was introducing us, a dog leaped out of the dark smoky crowd and grabbed me by the forearm. He wasn’t completely attacking me. He was just disabling me. He just held me there for a moment as if to say, “I got you, and you aren’t going anywhere.” I went into a fear/shock mode. As I looked out into the crowd, it was like the needle had scratched on the record and everyone in the room was staring at me and this dog hanging on my arm. It was horrible. The next moment I heard a loud yelling in German from the back of the room, which I instantly realized was the dog’s owner calling him off. The well-trained dog let go right away and ran off leaving me … a deer in the headlights with all eyes on me. I awkwardly tried to brush it off and get the show started, but I was shaken. I must have struggled through the songs because the rest is a foggy blocked-out memory after that. That was one of my worst shows, for sure.

AND HOW ABOUT ONE OF THE WEIRDEST? NOT NECESSARILY BAD, JUST SURREAL OR STRANGE.

We played kind of an odd gig in Tasmania. The regular venue in the city had been shut down for some reason the day before we arrived, so they moved the show about an hour outside down a lonely coastal road. There weren’t any towns along the coast, just beautiful land, sea and cool breezes. The venue was just a restaurant/bar inhabited by local people and a few punk rockers who had made the trek for the show. The locals were really friendly and we had fun, but you had this strange feeling you were at the end of the world. PLAY DATE IS A WHOLE NEW DEMOGRAPHIC WITH DIFFERENT KINDS OF VENUES FOR YOU. ANNY FUNNY EXPERIENCES PLAYING FOR THE LITTLE ONES?

It seems like there is at least one or two really adorable things that happen at every show. One in particular happened at a small show in Seattle at our friends’ coffee shop. There was a little boy who was probably about 3 or 4 years old dancing around and totally rocking out as soon as we started the first song. He was dancing and going around to all the other kids and adults, trying to get them to rock out with him! It seemed like he was mentally saying to them: “How can you not be rocking out right now? C’mon!” He just didn’t have the words for it, but he was trying to start a little pit. I was trying not to totally crack up, but then it went to the next level. By the third song he really had himself heated up, so he took his shirt off, dropped it off with his mom and dad on the side, who were trying not to totally lose it, and went straight back into “the pit,” which consisted of him and another little girl dancing around a little. He was totally rocking out with his shirt off at this point and kind of strutting around like a big dude at a hardcore show ruling the pit, only he was a tiny version of that … and completely unself-conscious. Shanti and I couldn’t look at him or each other anymore. We were really trying to hold it together. Eventually, he got tired and laid down on the floor on his stomach right in front of us, put his face in his hands and just watched us until he was ready to get up and rock some more. He was an amazing little guy and he totally made our day.

Those kinds of experiences with Play Date have been so amazing. It’s been really meaningful to us to create the potential first live music event these kids have ever seen. In many cases, it’s the first time the parents are sharing a live show with their kids, which is a huge thing!