“I GOT YOU, AND YOU AREN’T GOING ANYWHERE.” 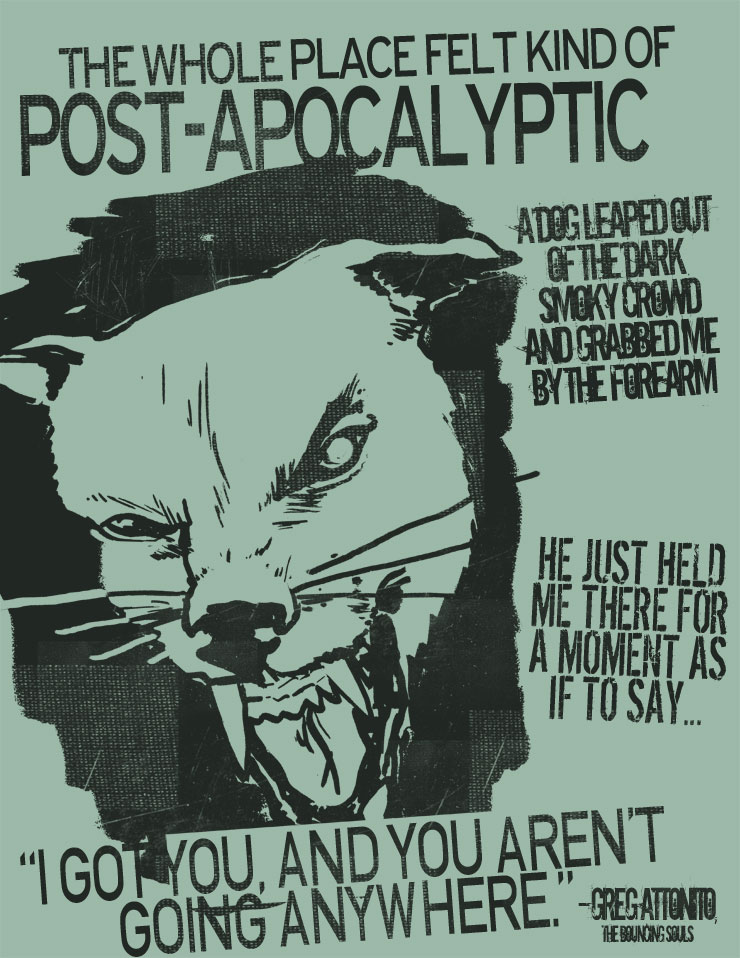 Greg Attonito shares one of his worst shows ever with The Bouncing Souls.

“There has definitely been more than one “worst gigs” ever, but I think a standout one was when I got attacked by a dog on stage. I think it was a pit bull.

We were playing a squat in Germany sometime in the ’90s. The venue was connected to an old partially redone World War II barracks that was being repurposed for all kinds of things. People had living spaces going on in the various old structures. The whole place felt kind of post-apocalyptic, and it sort of felt like the war had just ended the week before. There were dogs running around freely in the bar during the show, which was kind of unsettling, but nothing bad happened until I actually stepped on the stage and started saying “hello” into the microphone. Just as I was introducing us, a dog leaped out of the dark smoky crowd and grabbed me by the forearm. He wasn’t completely attacking me. He was just disabling me. He just held me there for a moment as if to say, “I got you, and you aren’t going anywhere.” I went into a fear/shock mode. As I looked out into the crowd, it was like the needle had scratched on the record and everyone in the room was staring at me and this dog hanging on my arm. It was horrible. The next moment I heard a loud yelling in German from the back of the room, which I instantly realized was the dog’s owner calling him off. The well-trained dog let go right away and ran off leaving me … a deer in the headlights with all eyes on me. I awkwardly tried to brush it off and get the show started, but I was shaken. I must have struggled through the songs because the rest is a foggy blocked-out memory after that. That was one of my worst shows, for sure.”

As told to Shawna Kenney, read the full interview here