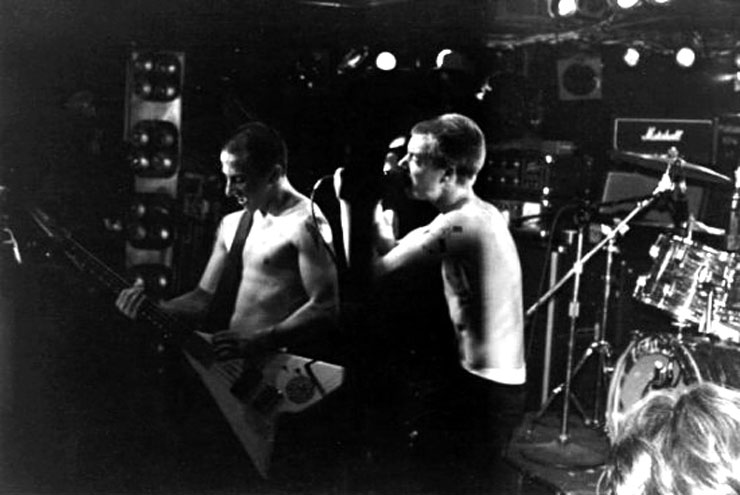 Jon Anastas was the bass player in DYS, one of the premier bands from the often mysticized Boston hardcore scene of the early ’80s. Along with their hometown brother band SS Decontrol, DYS pushed the antidrug message of straight edge to almost militant extremes while branding the philosophy with a clean-cut look of sweatshirts, high-top sneakers and flattops that’s still prominent in the hardcore scene today.

Green Room Radio recently caught up with Anastas in the town he now calls home—Los Angeles—to talk about touring as a hardcore punk band in the early ’80s, the infamous rivalry between Boston and New York in that era and why the Beantown got so wrapped up in straight edge.

When DYS did their first trips out of Boston to cities like Philadelphia or New York, what was the most exciting thing about going to these scenes?

Being basically middle-class suburban kids, and—at least in my case—16, 17, 18 years old, it was really eye-opening. Everything about it was exciting, or at least felt so at the time.

For example, in New York, these were the days of burned-out cars on the Cross Bronx Expressway and the police basically never going below 14th Street. We’d roll up to CBGB’s trying to look hard while actually being quite scared and out of our element. This was true of a lot of the places we went, where the punk and hardcore shows were in parts of town unlike anything we saw growing up. I remember playing a club above a seedy strip joint in Baltimore, and the Love Hall in Philly was not in a safe area either. So, you’d have these mostly suburban hardcore kids interacting with the locals. Sometimes it was really cool and inclusive, and other times it got bad fast.

Everyone talks about the infamous rivalry between the Boston and New York hardcore scenes in the early ’80s. Was it really as bad as it’s portrayed?

Compared to what happens today, or what went down in L.A., it was nothing, really. It was also more about factions than an overall scene war. Boston, for sure, did their best to create it. SSD would stuff their vehicles with as many kids as they could hold, roll up to Irving Plaza or the Rock Hotel. Someone would grab a Sharpie and say, “everyone draw an X on your forehead so you’ll know who not to punch in the face.” Choke would lead a straight-edge chant on-stage between songs, things like that. The friction would spill over from show to show and grow. On the other hand, there were New York people and bands where we could not have been closer with. We’d crash with them and explore the city together.

Although Ian MacKaye and D.C. came up with the term “straight edge,” it was Boston who branded the term with a look and sound. Why do you think Boston took the straight-edge ball and ran with it the way you guys did?

Boston has always had this flinty, old-school work ethic. It’s in our blood and we ran with it because everything that the Boston crew did, they did full on. It was inspiring. If some New Wave band would put up 100 fliers for their show, SSD would put up 1,000. If some touring band came in with a new Marshall amp, we’d have four stacks the next month. A lot of the guys played competitive sports before they found hardcore, or at least lifted weights. We were all trained in that mind-set. As they say in the gym, “Every day the weights are the same, the only thing that’s different is you.” Boston Crew members of SSD and DYS in 1982; photo by Gail Rush

The look of a shaved head was pretty popular with the Boston scene early on. Do you remember when that look had a negative connotation tacked on to it that revolved around fascism here in the U.S.?

Depends if you were talking inside the scene or not. Inside, no, as everyone knew the visual cues. A shaved head and white Nike Airs and a hoodie did not telegraph the same thing a shaved head and braces and a Fred Perry did. Everyone knew that. Outside the scene, I’m sure people thought we were skinheads; we used to say, if asked, “We’re not skinheads, we’re no-hairs.” That said, we were not afraid to leverage the appearance of a little skinhead attitude, especially against the old-school New Wave/punk bands that already existed in Boston. We wanted that fear if 15 or 20 of us roiled into a show.

When the late-’80s New York “Youth Crew” thing came in with Youth of Today, Bold came in, did you think they were biting what you guys were doing Boston in the early ’80s?

While I was already long out of the band Slapshot, my recollection was Choke [vocalist for Slapshot] indeed called out those bands, on record and on-stage, for biting the Boston look.

Why do you think their form of branding for straight edge took off like it did?

In terms of branding, it took off as it was strong: unique, iconic and they never deviated from it. The same rules I tell brands and clients to follow today. Hell, bands were even using the same fonts for their logos, the same photographers for their album covers, the same items on their merch tables. And, the message was a good one. So, why do you think kids still tour the country and get in sweatbox vans and play for little or no money in the same way you did in the early ’80s?

I believe the motivation has changed a couple times over the years. When we did it, it was either to “make a difference in the world,” or you just loved playing music and the genre/scenes. No one made any money and no one cared, as it was not even thought to be possible. So, there was no disappointment. Later, post–Green Day, kids very much did it as a “stepping stone” to be signed. And it worked. Today, with the state of the businesses what it is, there is no Green Day money to be made, but there is also a vibrant festival scene, so at least you can eat and sleep in a hotel. And, beyond the economics, it’s addictive. The energy from locking in with your bandmates in front of a strong crowd is amazing. I miss it still.

What were some of the best shows you played with DYS or Slapshot?

I know it’s not the most popular answer to have, but I like venues with big stages and big crowds and great sound systems and the room/materials to put on a performance. And, I’m also inspired by the collective talent of the guys I play with now. For those reasons, most of my favorite shows have been post-Reunion.

Being one of the second-stage headliners at Groezrock is near the top of the list. Aside from the great venue and the crowd, we were also just “on” that day. It’s hard for part-time bands to gel in the same way bands who play 200-plus shows a night do. We got to do five or six smaller shows in Europe in advance of the festival, and it paid off.

Emotionally, it was incredible to play both of Boston’s annual “events” in punk rock at the House of Blues. We opened for both the Bosstones’ Hometown Throwdown and the Dropkick Murphys’ St. Patricks Day shows. Hometown, our crowd, scale, Boston’s biggest punk bands ever—epic, both of them.

We also got to do a ton of other iconic festivals like SXSW.

Going back, the Rock Hotel with SSD and the show erupted into a riot, the Rat with GBH, Love Hall in Philly working through new material as a five-piece and—of course—CBGB’s for no other reason than the incredible history of people who have been on that stage.

On the flip side, what were the worst shows and why?

The hardest thing about playing live in a band—I believe—is the hit-or-miss nature of playing live. One night, you’re great, the crowd loves you and the hall is packed. The next, you’re just off, you hate each other, no one shows up, the mix is bad.

We’ve had all of it. Nights your guitar just will not stay in tune, nights you are sure the soundman is doing it all wrong on purpose, nights your amps keep blowing. We’ve played to tiny crowds when expecting big ones.

What I recall as being the worst may not even be what the fans remember.

All that said, there is no worse feeling than knowing you had to use the CBGB’s bathrooms before you played.