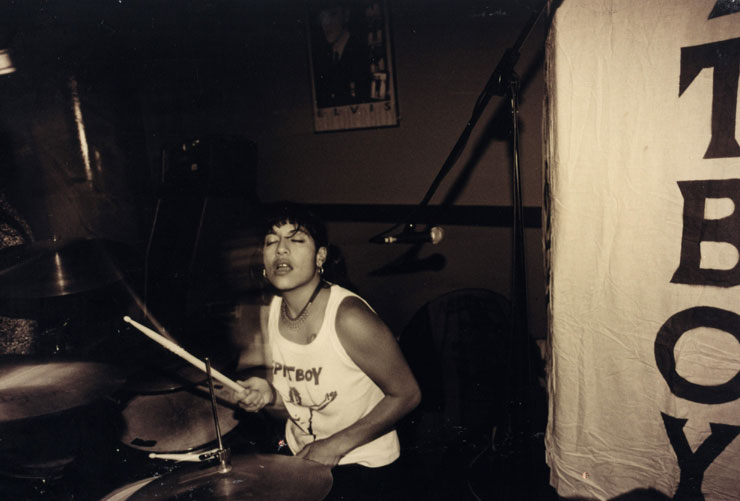 Michelle Cruz Gonzales drummed in San Francisco Bay Area band Spitboy in the early ’90s and grew up to be an English professor and writer who has published in numerous anthologies, journals and magazines. Here, she shares a few memories for Green Room Radio, but if you want more, read her memoir, The Spitboy Rule: Tales of a Xicana in a Female Punk Band (with foreword written by Martín Sorrondeguy of Limp Wrist and Los Crudos), due out in April on PM Press.

WHEN I WAS GOING TO SHOWS, SKINHEAD GIRLS WERE THE PEOPLE I FEARED. HOW ABOUT YOU?

I used to get threats by skinhead girls all the time at The Farm. I’d drive three hours to go to a show and then be like, “great, the skinhead girls are here, and now I have to watch my ass.”

IT SEEMS LIKE SPITBOY DID SOME ROUGHING-IT VAN TOURS. I’M SURE YOU HAD SOME HORRIBLE EXPERIENCES.

The worst show we ever played was in a basement of a house in Albuquerque, New Mexico. This was our first jaunt—like a week or 10 days, so we didn’t even call it a tour. We met Paxton Quigley there, who were also from the Bay Area, so we were all friends, and a couple of them were native to the Southwest, so we thought, “oh, it’ll be so fun!” We get to this basement. This guy Jessie did shows for a couple years there. It was one of those where you park in the alley and load in from the back, so I never saw the front of the house.

As all women in the band, there were certain kinds of shows that always made us nervous, and right away when we got there we said, “shoot, it’s that kind of show.” We faced a threat that people in other bands didn’t have to worry about. We roll up and were like, great, a bunch of drunk dudes who just want to mosh really hard. That was the worst kind of show for Spitboy—no restrictions on alcohol—we mostly played all-ages shows that a lot of times meant no drinking and also safer for us.

A band played before us, and guys were moshing hard in the pit. There was a fight so we stopped and this one guy’s nose was bleeding everywhere. He says, “just play, just play!” He’s shaken up his beer and then opened it and beer just sprayed all over Adrienne’s face. We were like, “oh my god, this is horrible.” Then we started playing another song and Jessie said, “You have to stop playing. It’s going to get too violent. People are going to get hurt.” So we tell the crowd we can’t play anymore and this guy from the back says, “Shut up and play!” We repeated that the show was over. Then he says, “If you want to prove your womanhood, shut up and spread your legs and play.” I lost it. I jumped off the drum set and started chasing the guy. The guys from Paxton Quigley grabbed me and stopped me. The guitar player said in my ear, “Don’t mess with that guy. We heard earlier that he was on America’s Most Wanted.” Not that I could have beat him up, but I was a hothead when I was younger.

It’s kind of funny now, but one by one we all started crying. Then people came up to us after and said, “oh, we’re so sorry. We hope you don’t think everyone from New Mexico is like this. Those guys are assholes who always come and ruin shows.” People just started pulling money out of their pockets and giving it to us. We sold a bunch of T-shirts and stuff. We went to Santa Fe after that and played to actual friends. It turned out in the end to be kind of nice, but it was so humiliating.

THERE WERE MANY SHOWS LIKE THAT IN WEIRD VENUES WHERE THERE WAS A SENSE THAT NO ONE’S IN CHARGE OR THE PEOPLE IN CHARGE WERE REALLY YOUNG—LIKE THE SHOWS MY FRIEND AND I BOOKED, WE WERE 18 AND PEOPLE’S PARENTS WERE CALLING US BEFORE THEY DROPPED THEIR KID OFF FOR A WEEKEND ALL-AGES SHOW, ASKING, “IS THERE ANY KIND OF SUPERVISION?” WE’D BE LIKE, “SURE, WE’RE HERE!”

Totally. It’s funny the kinds of things we didn’t think about. In some ways it wasn’t too much of a worry, but sometimes now it’s like, “wow, we weren’t as safe as we thought we were.” It was just your friends doing security, right? ANY OTHER WEIRD EXPERIENCES ON THE ROAD?

I was talking about this and it’s something I hadn’t thought about in a long time. This was in Georgia. When I was loading my drums in, there was this guy who kept hovering around the van but wasn’t talking to me. I kept looking at him out of the corner of my eye because he had a weird look in his eye. I looked at him again and he came up and said, “I just wanted you to know that I’m the kind of guy that you write songs about.” So I was thinking, “OK, thanks for telling us that because now we’re going to load our stuff faster and get the hell out of here.” We were going to stay at the promoter’s house but actually ended up parking the van by the beach and sleeping there because all of us were so nervous.

We didn’t take anyone on tour with us, and we didn’t want to have male security because it seemed like a contradiction to what we were doing, but I’m sure some kind of security could have come in handy.