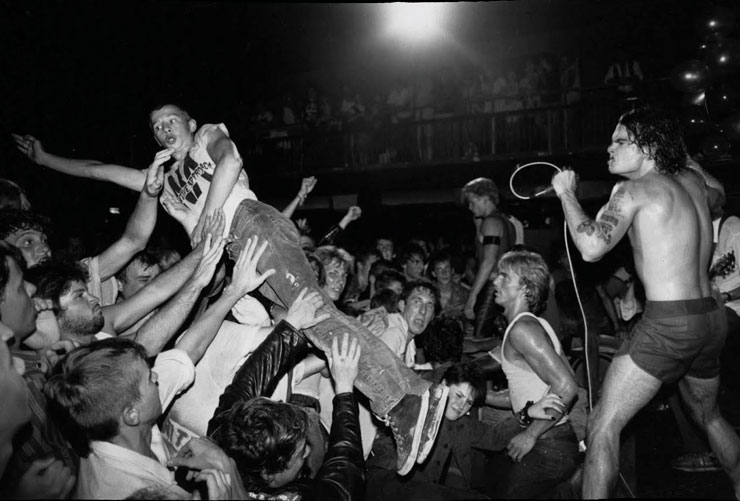 Fistfights have routinely settled such discussions, but here is a list of the ten most important bands of the early-80s American Hardcore explosion.  Described below are groups that sold relatively few units in their heyday, yet now have far more cultural relevance than million-sellers of their era such as Styx, Kansas and Journey.  These are the pioneers who paid the price so that you can now walk around with shaved heads and tattoos. Time to pay homage! DEAD KENNEDYS was by far the biggest band of American Hardcore — their tours and records as popular (on a cult level) as they were influential. The Bay Area act, led by the ignominious Jello Biafra, basically launched the scene, by identifying and choosing the young local bands as their opening acts that would come to define the movement. In a scene of teenagers, these late-20-somethings fusing Biafra’s cerebral street politics and East Bay Ray’s tweaked surf/punk guitar — on LPs like Fresh Fruit For Rotting Vegetables and In God We Trust Inc. or 45s like “Holiday In Cambodia” and “Nazi Punks Fuck Off” — forever changed the course of music. BLACK FLAG was the most important American underground rock band of the 20th century. The first full-fledged DIY punk group did not come from New York City or Hollywood or Haight-Ashbury but from the sterile suburban LA beach town of Hermosa Beach, CA. Their label SST Records — launching not just Flag but Minutemen, Hüsker Dü, Meat Puppets and Sonic Youth — set the mold for every indie rock label since. Punk insiders like to name-check early Flag singers Keith Morris, Ron Reyes and Dez Cadena, but five years of Henry Rollins was so intense on albums like Damaged and My War that he deserves every shred of success and respect he’s achieved. CIRCLE JERKS, an elite American Hardcore band on par with Black Flag and Dead Kennedys, could play to 500-1,000 kids in any city across America. Keith Morris, the original Black Flag singer, joined Greg Hetson from an early lineup of Redd Kross, to form a “supergroup” that exploded as stars of Penelope Sheeris’ 1980 film The Decline Of Western Civilization.  That year also saw their classic Group Sex LP — 14 songs in 18 minutes. Keith and Greg burned through various lineups, but one of the best-ever Hardcore live bands was 1983’s Golden Shower of Hits tour with bassist Earl Liberty (Saccharine Trust) and drummer Chuck Biscuits (D.O.A., Black Flag, Danzig). MINOR THREAT is revered for their riveting sound, lyrical gravity, live intensity, and breakdown of barriers between band and fans. Ian MacKaye, with his virulent anti-industry, anti-star, pro-scene exhortations set in motion a die-hard mindset that begat almost everything we now call Hardcore. Ian’s anti-drug song “Straight Edge” created a lasting movement in itself. His “Guilty of Being White” told what it was like to grow up in DC public schools. Ian’s label Dischord Records reads like a modern history of Washington, DC rock music. After three-plus years, Ian moved on from the scene, and spent his salad days portending the indie rock and emo scenes in his next band Fugazi. MISFITS, named for Marilyn Monroe’s final film, delivered a hyper-yet-melodic assault, taking that 50/60s-style Rock & Roll foundation and making it nuclear. In the severe, lo-tech, Hardcore world, they came off as larger than life, dressed like mutant sci-fi/comic-book Kiss-style characters. The Lodi, NJ quartet’s slew of self-released singles and two official studio albums, 1982’s Walk Among Us and 1983’s Earth A.D., remain of legend. Founder/frontman Glenn Danzig, a brilliant vocalist like the Elvis Presley/Jim Morrison of the 80s underground, carried on that ghoulish legend in his next project Samhain, and then his eponymous solo band, Danzig. TSOL (TRUE SOUNDS OF LIBERTY) was quite possibly the most dangerous band of all time. No one knew what to make of these four huge, hot surfer dudes. TSOL rose from the ashes of Vicious Circle, whose gigs were infamous for their carnage. TSOL was always stayed one step ahead of their audience, and probably a little too smart for their own good. 1980’s self-titled 12” EP for Posh Boy (“Abolish Government,” “World War III”) got lauded for its political fervor. Then frontman Jack Grisham started smearing makeup on his face and singing about fucking corpses, and people called it “Goth,” on 1981’s Dance With Me (“Code Blue,” “Sounds Of Laughter”). BIG BOYS, outside LA, SF, NY, and DC, were the most important band of the era, although they may not read as such today. These mind-blowing funk-punk pioneers — muse to a young Red Hot Chili Peppers — drew massive crowds across the Lone Star State. The band, all big boy, met hanging out at Austin, TX skateparks. Queer 250-pound frontman Randy “Biscuit” Turner wore tattered dresses onstage — which at the time was downright distressing. Their legend is amazing, considering they rarely toured and only recorded for obscure labels (their apex 1981’s Where’s My Towel a.k.a. Industry Standard.).  The ensemble imploded on the verge of national acclaim. D.O.A. is the only American Hardcore band not from the States. They began in Burnaby, British Columbia, ten miles from Vancouver. 1980’s Something Better Change is a punk classic. 1981’s rapid-fire Hardcore ’81 — blending upbeat rock riffs and snarly vocals dealing with radical politics — was where the genre got its name. One constant prevails in the band’s star-crossed career was poor choices of record companies; locating their original vinyl is nearly impossible. Frontman Joey “Shithead” Keighley has since written a compelling autobiography called I, Shithead, and recently ran for public office as a Green Party candidate. AGNOSTIC FRONT are the only original-era Hardcore band still standing. It may be hard to grasp today, but teen NYHC bands like they, Cro-Mags and Murphy’s Law didn’t live with mommy and daddy; they resided in dangerous Lower East Side NYC squats. Vinnie Stigma’s band went through numerous singers before deciding on Roger Miret a Union City, NJ Cuban émigré, who’d become the role model for modern tough-guy HC. 1983’s Don Fury-produced debut United Blood 7” EP defines Skinhead glory. 1984’s Victim In Pain and 1986’s Cause For Alarm, while sonically limited, are incredible albums. Vinnie and Roger soldier on as ambassadors of the scene.

Leave a reply to KeckArmy Click here to cancel the reply