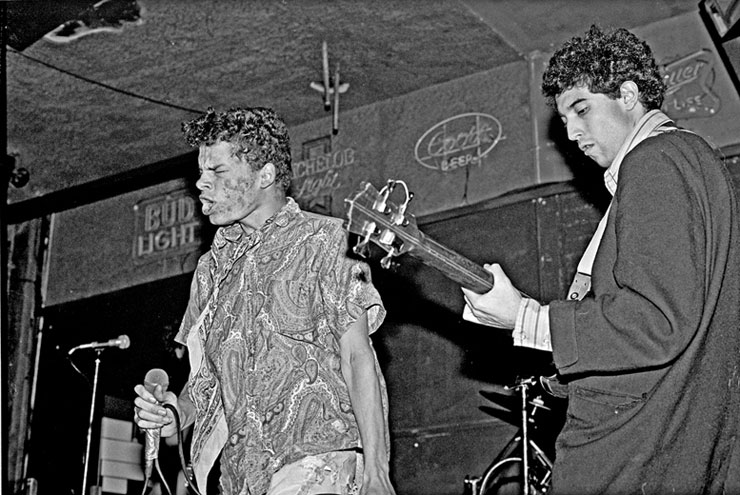 Brian Brannon is one the original D.I.Y. skater-punks from the 1980s who is still rocking hard with his band JFA (originally Jodie Foster’s Army). In 1981, the band’s first show was opening for Black Flag in their hometown of Phoenix, Arizona cementing their path to become one of the seminal punk bands of the day. Brannon parlayed his love of skateboarding into a full-time job as the editor of Thrasher Magazine for many years in the late 1980s and early 1990s. Today, Brian Brannon is a decorated Senior Chief Petty Officer in the United States Navy Reserve, which may come as a surprise for some to hear, considering the anti-establishment ethos of punk rock’s roots. But for Brannon, to be a true Punk is more about perseverance in the face of adversity and standing up for what you believe than a fashion statement or arbitrary code of misconduct.

HOW HAS THE PUNK MOVEMENT THAT YOU CAME UP IN SHAPED YOU AS AN ADULT?

Brian Brannon: That’s a real good question. A lot of people ask me: “How is punk different now than it was in the early 80s, when JFA first started out, which do you like better?”

In the early 80s, to be a punk, or to even be a skateboarder, was an uphill battle. Neither were very popular. Especially walking around with weird color hair. Because people would just literally pull their Camero over and start beating you up. At the same time, Skateboarding was totally over with and the skateparks had all closed down. So to skate anything you had to break the law, whether it was go find an empty pools or ditches or whatever.

So it was really a struggle to be both a punk and a skater. When you saw other people that were punks or skaters, you knew that they were real, because no one in their right mind is going to do something that’s going to get your ass kicked just to try and be cool. What I liked about that time was the commitment that it required to do those things. It was just a total uphill battle for everything. But the payoffs were great. Just being with friends and people that were just really solid. They may not be the same kind of punk that you were, maybe they liked artsy music, but you all came together. The scene had a very strong community around it. We were all a bunch of outcasts, really. Now today, skateboarding is hugely popular. It’s going to be in the Olympics, which is crazy. Then there’s the Warped Tour, and punk rock bands that are huge.

Skaters are making the money they deserve for being the athletes that they are and for taking the risks that you take being a great skater. Today the really top pros are getting paid well, and god bless ’em. I think that’s amazing. I’m glad to see it. Now they’re building skateparks everywhere, there’s this Vans Skatepark just down the street from my house. I’m usually there on the weekends. They took everything they learned about skateboarding and building concrete skateparks, and put it into this park. It’s 2 blocks from my house. I don’t have to run from the cops! I just go there. It’s just amazing,

And now days the bands are playing shows with good turnouts, and we don’t have to deal with sleazy promoters as much. And there’s not riots where you’re fighting the cops or whatever. I mean they’re both good, but in answer to your question: what did I get out of my beginnings as a punker, is, if I want to do something then I’m going to do it. And whatever obstacles are in my way, I’m going to overcome them. I’ll take getting punched in the face or called names, or that I’ve just really got to work hard at something to make it happen. Because I know the value of it. I’m not going to do that for something stupid. Or for something that I don’t really value. But for things that are important for me, that has been a real strong character trait that I developed from being a punk. And a lot of other punks have that. Today, a lot of things are easy to do, and a lot of people would rather not do things if they’re that difficult. But what I came from is if it’s important enough you’ll do whatever it takes to get it done.

WHAT IS YOUR DEFINITION OF PUNK?

I just think it means doing what you believe in and chasing your dreams. Being who you are regardless of what anybody else thinks. That could apply to a lot of other things, too. But in the punk aspect, you have the music that can also inspire you and serve as a community to get together. It’s really doing what you want to do, because you want to do it, not because you’re looking to get paid for something or because you think it is cool. It’s just freedom of expression.

WHAT’S YOUR WORST GIG EVER?

If you were talking about best gigs, I could give you a whole bunch of them. We played the Viper Room a couple of weeks ago, and it was the first club that we ever played where the bathroom smelled better than the club itself. I don’t know if someone died or threw up in the stairway of the club or what, but the bathroom smelled real nice. I’ve walked into gigs where the toilets been backed up and people are peeing in the sinks and there’s some liquid you don’t even want to know what it is 3 inches deep that you gotta walk through. But those things that doesn’t really make it a bad gig. The gig itself is probably pretty kickass.

What I do consider a bad gig, and what I do consider the worst gig that we have ever played was fairly early on in our career, and I think it was the first time we played San Francisco. We played at The Elite Club, which is now the Fillmore, and the day of the show was April 10th, 1982. The bands on the bill were Deadly Reign, JFA, Meat Puppets, The Undead, Flesheaters and the Misfits. We drove all the way out there to San Francisco, stoked to be on the bill. Meat Puppets were from Arizona just like us, great friends of ours, and I loved to watch them play because they were just such amazing musicians. Deadly Reign was a really cool local band, just young kids coming up, and we hung out. Having a backstage area was new to us, being punks at that time. The Misfits had their own room. We stuck our head in there, but they didn’t even want to talk to us, they were just too busy being the Misfits getting ready and all that. Between the time that the band before them played and the time that they went on there was an hour long wait. So the natives were getting pretty restless waiting for them. It was just way too long, They finally came out were wearing all their stage make up and all that. The bass player had like 12 bass guitars all set up and they all had the same skull on the headstock. They started playing and he would break a bass like every song or every other song. The crowd just got more and more NOT into them as they went on because it was clear their stage show was an act. So the crowd started yelling at them between songs and saying stuff to them.

I remember the drummer got really mad and jumped off the stage into the crowd to kick some ass, and he just got his butt kicked. He crawled back onto the stage just a shadow of his former self. He brought that on himself for running out and trying to fight with the crowd. Any time you get into a fight you gotta expect you’re gonna get your ass kicked. That’s kind of how it goes.

So I was sitting on the stage talking to one of the local kids named Tim (Sutliff), who I had just met. We were sitting on the edge of the stage, just watching the crowd and everybody dance. Then I turned, just in time to see Doyle from the Misfits, take the body of his guitar and instead of breaking his guitar on the stage, he took the guitar and overhand swung it and buried it into my friend Tim’s head, this guy that I was sitting right next to. I saw the guitar go into his skull about 3 or 4 inches, just enter into his skull and totally knock him out. Obviously there was blood everywhere. And that was it. If the crowd was hostile before that, they were really hostile after that.

The whole crowd was just ready to kill them right then. I know I was. They ran off the stage. Locked themselves upstairs in the backstage green room, and the crowd was just a mob scene. People were seriously out for blood. We were ready and waiting. So the security pushed everybody out. We were still hanging out outside the club for 2 or 3 hours just to get a piece of them.

This guy Tim, he lived. But he’s had to take Lithium for the rest of his life. He obviously has brain trauma. I don’t know if there was any charges filed. But for all the Misfits talk about being tough guys, that’s not tough to me what they did. And obviously, I’ve never been a fan ever since.

That was definitely the worst gig we ever played.

WHOA. THAT IS A BAD GIG. WHEN ARE YOU WRITING YOUR AUTOBIOGRAPHY?

One of these days.

AND JFA IS STILL GOING STRONG AFTER ALL THESE YEARS? SOME BANDS DON’T EVEN MAKE IT 3 YEARS.

This will be our 35th anniversary coming up this month. At some point you just stop celebrating those. It just makes you seem old.

We’ve always just had fun. It was a never a job. As long as we’re having fun, we’re still doing it. When we tour we’re always looking for places to skate. Skating would be more important than doing the soundcheck. I think having the tie-in with the skating helped a lot because we got to skate some pretty cool spots and that helps us keep doing it. We’re working on recording some new songs, and playing a lot in Southern California. We play different places when we can, like Texas and Arizona. We’re going to play in England at the Rebellion Festival in London in August, so that should be fun.

I’m still doing everything I was doing 20-30 years ago. It’s really my heart and stuff I enjoy. Still playing in the band. Still surfing and skating all the time. I have a daughter, got my lovely wife… Just living the life. I’m pretty happy.