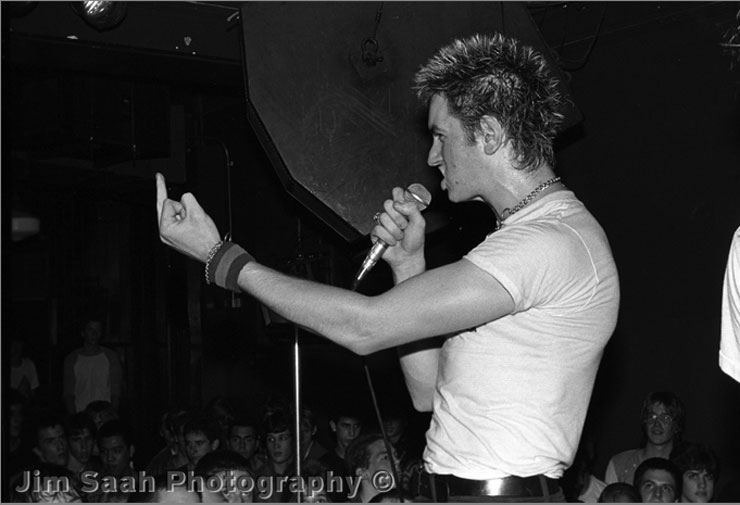 Sab Grey is the frontman for Washington D.C’s Iron Cross; one of the first self-proclaimed skinhead bands on the American Hardcore Punk scene. From 1981 to 1985, they left behind a trail of broken hearts, cigarette butts and empty booze bottles across the scene as well as two classic seven-inch eps: Skinhead Glory (1982) and Hated and Proud (1983) In recent years, Sab has reformed the band to release new material and tour both the U.S and Europe to great acclaim.

We recently tracked down Grey in his native Baltimore to talk D.C Hardcore, Agnostic Front’s cover of an Iron Cross classic and the highs and lows of a touring punk band.

IN THE EARLY 80’S D.C. HARDCORE PUNK SCENE, YOU HAD BANDS LIKE MINOR THREAT AND THE BAD BRAINS PLAYING THIS MILLION-MILE-AN-HOUR STUFF FUELED BY PRECISION. WAS IT A CONSCIOUS EFFORT FOR IRON CROSS TO TAKE EVERYTHING AT A MID-TEMPO PACE TO STICK OUT?

Sab Grey: Yes, it definitely was. All our friends were playing fast so we just thought we would go the other way. Besides they were better musicians than us at the time! Dante Ferranto (drums) and Mark Haggerty (guitar) were only 15 and 14! And what else were we supposed to do, play better than Minor Threat, Bad Brains and Void?

EXACTLY! YOU WERE WORKING WITH WHAT YOU HAD; THE TRUE MEANING OF PUNK. BUT, IN REGARDS TO THAT EARLY 80’S D.C. HARDCORE PUNK SCENE, WHAT DO YOU THINK MADE IT SO UNIQUE THAT EVERYONE HAD IT’S EYES AND EARS ON IT AT THE TIME?

I honestly don’t know, but I do know we were different. Maybe it was the Straight Edge thing but that wasn’t everybody so I really don’t know. It must be one of the intangibles like what made Memphis in 1954 and 1960 or San Francisco in ’66 special? Things just come together sometimes and D.C certainly ain’t like that now. But nor are the other places. IRON CROSS WERE ONE OF THE FIRST BANDS IN AMERICA TO CLAIM TO BE A FULL-FLEDGED SKINHEAD BAND. WAS IT A BURDEN TAKINg ON THAT CLAIM IN THE 80’S?

Yes and no. I mean, it wasn’t any different to us than being a punk and we all considered ourselves punks. It was more the dress and style we liked, and the Ska from Madness and The Specials. But Dante and Mark were always punks and dressed punk. I was the skinhead, except when I wasn’t because I grew my hair out into a spikey top or something. We loved it all, and at our time here in America there weren’t any right wing cunts about to fuck it up. That all came later. Mind you there was some dickheads, like Maximum Rock n’ Roll Magazine that just had it out for us no matter what. I could have gone on stage in a pink tu-tu and golf shoes and those assholes would have complained. But what can you do, eh? Having said that, if you call your first record Skinhead Glory I suppose you’re leaving yourself open!

AGNOSTIC FRONT FAMOUSLY COVERED THE IRON CROSS SONG “CRUCIFIED (FOR YOUR SINS)” ON THEIR 1987 ALBUM LIBERTY AND JUSTICE FOR… DO YOU REMEMBER HOW YOU FOUND OUT ABOUT THAT?

I was working in a record shop in Notting Hill in London around ‘87 or ‘88. The Agnostic Front album came across the counter and I remember going “Oh, look there’s my old friends. They’ve put an album out.” Then I flipped it over to read the back and there was my song on it. I was quite surprised and quite pleased.

It’s funny now because I think they’ve played that song so many times, people attribute it more to them than Iron Cross.

Yes. It’s happened quite a few times. You come off stage and someone’s there and says “Nice A.F. cover, dude.” All I can say is, “Thanks, mate.”

THE ORIGINAL LINE-UP OF IRON CROSS BROKE UP AROUND 1985 OR SO. IS THAT WHERE YOU ALSO SORT OF LOST INTEREST IN THE D.C. HARDCORE PUNK SCENE?

Yeah, for me it was ‘85. All the bands had broken up by then and it was just a dead time. Then it all regrouped and became that “Revolution Summer” stuff, which wasn’t me. I was looking at it going “What? So we’re hippies now? That’s all we’ve done? I’m out.” Let’s not forget this is also the time when Metal started invading the scene too and I fucking hate metal, unless it’s The Obsessed or about three other bands. Other than that, it’s a total shit show. I am not interested in your swords and dwarves. I didn’t spend my life fighting the Metal jocks to suddenly become pals just because one guy in Metallica wears a T.S.O.L t-shirt, know what I mean? So, between those two directions there wasn’t much for me so I fucked off to England again. THAT FIRST LINE-UP OF THE BAND TOURED AMERICA ONLY ONCE, RIGHT?

Yeah, we did the one in ‘84. But there was one in ‘83 where we only did the first gig and then Dante up and quit and went home. I was furious to say the least! The whole tour gone in a flash! Not only that, but I had come back from to London for the tour. I was having a great time in a squat in Brixton and was planning on staying but the band got in touch about the tour so back I went. For one gig!

So, in ‘84 we went out again. We made it all the way to San Francisco and got ripped off by the promoter and got a phone call that we were being evicted from our house back in D.C because our dipshit roommates and subletters couldn’t be bothered to pay the rent. We had enough money to scrape back, tails between our legs and save our meager goods so that’s what we did. As it happened, I called Kevin Seconds in Reno, Nevada because it was on the way back and he set us up a show immediately. The show got us enough money that we could eat food on the drive home which was brilliant and very kind of him to do. On the low end of the spectrum, we had to leave the gig in a hurry at the end. Some redneck took offence at my leather jacket and decided to pull a shotgun out to discuss it with me further.

JESUS CHRIST, THAT SOUNDS HORRIBLE. WHAT ABOUT SOME OF THE BETTER GIGS IRON CROSS HAVE DONE.

The best was no doubt Prague in the winter of 2001 with Agnostic Front, the Distillers and Death Threat. It was the gig we were all looking forward to on the tour; there’s always one. Anyways, we left the gig in Germany the night before and drove through the night as our driver was Czech and one of the promoters wanted him to get there early so that he had all day to set up. When we get to the Czech border all does not go well. Our bass player was Dmitri and he was Russian and still a Russian citizen. Now in fairness he had called the Russian embassy before we left and asked if he needed a visa to get into the Czech Republic and they had assured him he did not. That didn’t stop the border guards. At two in the morning. In the middle of nowhere. In the freezing cold. And in the snow. They weren’t going to let him in. They took him out of the van and grilled him. Then they gave him back and told us to basically fuck off and that he wasn’t entering the country. So standing forlorn and desperate we hatched a cunning plan. We drove off into the night to find another border crossing which we did. We stuffed Dmitri under the seats and threw some blankets over him. We pull up at the border, passports go out the window; minus Big D’s Russian one of course! Passports come back in the window and we are free to go. Jackpot! We’re in! We drive on and suddenly there’s shrieks and screams coming from under the seats because apparently Dmitri was claustrophobic and freaking out the whole time. He got stuck and couldn’t wriggle out on his own.

Of course it really was the best gig ever! Amazing venue in the basement of the opera house in a stunningly beautiful city. We played a brilliant set. The Distillers blew me away and I have never seen Agnostic Front play better ever. They weren’t going to do “Crucified” that night, because we were sharing the bill, but after four encores and the crowd baying for more they did and Roger and I split the vocals. Best gig ever! The rest of the night was rather good as well and we may be the only band to smuggle a Russian INTO Eastern Europe!