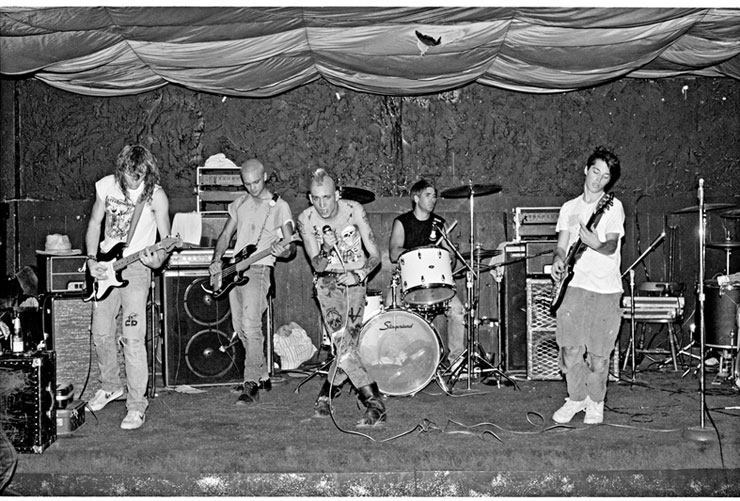 The 1980’s were arguably the most exciting time for hardcore. The movement was in its infancy: it was loud and rebellious but thoughtful and political. Photographer Ed Arnaud was in Tucson, Arizona documenting the burgeoning scene with his camera. His raw photos captured some of the most important bands of the era. We spoke to Ed about Black Flag, developing film and having to sneak a camera into shows when necessary. WHAT WAS THE SCENE LIKE IN THE EARLY 80’S IN TUSCON? YOU GUYYS WEREN’T IN A MAJOR CITY, BUT FROM YOUR PHOTOS I CAN TELL MOST OF THE POPULAR BANDS OF THE TIME CAME THROUGH.

My friend Bill C (guitarist with Tucson 80’s hardcore band Conflict) recently described the Tucson scene best. “The Tucson scene in the early 80’s was pretty unique. It wasn’t really a punk scene, it was more of a collection of people, many very young, who were being creative and seeking alternatives to the mainstream.” The scene in Tucson was very open-minded and the audiences were receptive to all bands. Our early 80’s scene ranged from jangly garage psychedelic, to surf, artsy no-wave, noise, to hardcore punk, most often all on the same bill. Bands loved playing in Tucson because we were very friendly and welcoming, plus our most important venue, The Backstage, was easy to book a show at. The Backstage was my favorite venue. No barricades, bouncers, or cops, or huge crowds. The sound engineer at The Backstage, Randy McReynolds, was and still is one of the best sound guys ever. Another reason bands loved playing there.

Tucson is 8 hours away from LA. Bands traveling to and from California would stop here. We had several great venues to play at and plenty of friendly floors to sleep on. In 1982, Husker Dü stopped here on their way to LA to record Metal Circus with SST. The show included The Vandals, Youth Brigade, and our own Conflict (US) on the bill. Only about 20 people witnessed that show and Husker Dü stopped here again on their way home. Other bands that played in Tucson that I didn’t photograph include Minor Threat, Bad Brains, DOA, Channel 3, Battalion of Saints, Social D, TSOL, plus others. Tucson and Phoenix had our own great bands plus a constant flow of touring bands allowed for 2-3 great shows per week back then. Conflict (US) was a female fronted politically charged hardcore band from right here in Tucson. We were lucky to have them especially since there weren’t very many women fronting hardcore bands back then. Great band. I GREW UP GOING TO HARDCORE SHOWS IN THE LATES 90’S / EARLY 2000’S IN ATLANTA. WE HAD A STRONG SCENE AND A LOT OF PEOPLE WERE TAKING PHOTOS AT THE TIME. WAS IT THE SAME IN YOUR ERA OR WERE YOU THE GUY CAPTURING IT ALL?

I was the only person taking photographs at most of the shows I went to with my camera. I remember two shows where I noticed and managed to capture people holding a camera. At a Circle Jerks show in 1983 a person had a disc film camera (80’s technology), and at a Black Flag show someone in the audience had a rangefinder 35mm. I recently tried to contact the person with the rangefinder to see if she captured me taking photos, but no reply from her yet. I stood near Greg Ginn for most of the show and I’d love to have a photo of me on stage with Black Flag. I’m very fortunate to have been able to photograph some of these shows. Fun and exciting times. YOU WOULD SNEAK YOUR CAMERA IN WHEN NECESSARY, I APPRECIATE THE DEDICATION. WERE YOU DEVELOPING THE PHOTOS YOURSELF? MAKING PRINTS FOR FRIENDS?

Some of the bigger venues would not allow cameras, so I managed to sneak my camera in. Taking photos was tricky though because depending on the crowd, I couldn’t get very close and at the same time couldn’t get too close in fear that a bouncer would see me and toss me out.
I developed and printed the black and white photographs. My old high school teacher let me use the school darkroom in the evening when he would teach a community college class. Also there was a darkroom rental place here in Tucson at the time. The film developing I could do at home. A lot of my photographs and film just got filed in a box. A few local bands asked me for some photos, but that’s about it. I was kind of a loner and didn’t have many friends back then, and the people I did hang out with knew nothing about punk/hardcore or didn’t understand it. My two brothers were into the scene with me, and were often the only people who would see my photos back then. YOU SHOT SOME ICONIC IMAGES OF THE BEST HARDCORE PUNK BANDS OF THE TIME: BLACK FLAG, THE VANDALS, SUICIDAL TENDENCIES, ETC… YOU ALSO PHOTOGRAPHED THE POLICE AND THE BANGLES. WERE YOU LISTENING TO A LITTLE BIT OF EVERYTHING AT THE TIME?

I mostly listened to punk bands at the time. In the early 80’s, a friend of mine published an entertainment magazine called Arizona Sounds. Circulation was pretty small and it was distributed in Tucson and Phoenix. He managed to get photo passes for me to photograph some of the more successful artists at that time like The Police. I wasn’t too familiar with The Bangles back then. I went to that show because Redd Kross was scheduled to play first. Unfortunately after hearing their sound check, the promoter changed his mind at the last minute saying Redd Kross didn’t fit the bill. At least I got to see the sound check. Dez Cadena was in Redd Kross at that time. WHAT WAS THE MOST MEMORABLE SHOW YOU WENT TO, AND DO YOU REMEMBER ANY PARTICULARLY BAD GIGS?

The most memorable show would be Black Flag at The Backstage in 1983. I think what makes it more memorable is that I photographed two bands that night and I was on stage during Black Flag. They were amazing. Greg’s guitar sound still stands out in my mind. He played his Dan Armstrong guitar and as you can see in my photo of Greg there is no tone or volume knob on it. I saw Black Flag two other times in 1984. One more time in Tucson and then in Phoenix when they played with the Ramones at an old theater called the Palace West. Kira was playing bass for Black Flag at that time. An epic show.

The only bad gig that comes to mind is when Social Distortion played at The Backstage in 1983. They sounded terrible and I think I remember Ness being drunk. HARDCORE IS A SPECIAL WORLD TO GROW UP IN, I AM SUPER HAPPY THAT I DISCOVERED IT AT A YOUNG AGE. IT TEACHES YOU ABOUT THINGS IN A VERY DIFFERENT WAY, AND THE PEOPLE ARE CREATIVE AND SOMETIMES WEIRD, LIVING OUTSIDE OF SOCIAL NORMS. HOW DID THE SCENE IN TUSCON INFLUENCE YOUR LIFE?

The Tucson scene definitely influenced me musically. I was into punk ever since I saw CBS news report on the Sex Pistols in 1977, but seeing bands live and up close in the early 80’s was a great experience for me. My first hardcore show was The Battalion of Saints at The Backstage. After that show, I became really interested in documenting live shows. So that early 80’s Tucson scene also influenced me as a photographer. I still like to document live shows taking still photographs and now video.