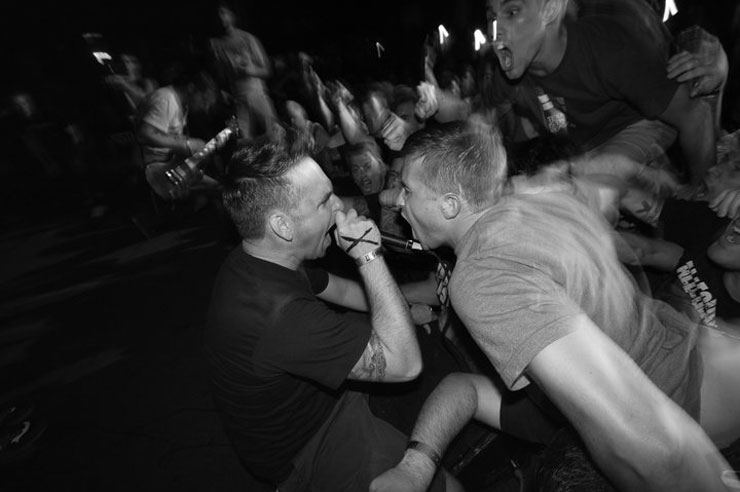 Tim McMahon has been a familiar face of Hardcore punk ever since he burst onto the scene in 1990 as the vocalist for the New Jersey based Straight Edge band, Mouthpiece. Since then, he has also fronted units such as Hands Tied, Face The Enemy and Triple Threat while still promoting the ideas of clean living and sharp Youth Crew fashion.

GRR! recently caught up with Tim in his native Trenton, New Jersey to chat about the differences in touring between the 90’s and now, what drew him to pursue a drug-free lifestyle and what keeps him dedicated to Hardcore.

WHEN MOUTHPIECE FINALLY MADE IT OUT OF THEIR NORMAL CONFINES OF PLAYING IN PENNSYLVANIA AND NEW JERSEY, WHAT WERE THE THINGS YOU NOTICED FIRST OFF THAT DIFFERED FROM SCENE TO SCENE?

Well, the obvious answer to that is all the different faces. For the first year or so of doing Mouthpiece, every show we played, we seemed to have a crew of friends that followed us around. Any given show we’d have ten to fifteen of our friends there, but we’d also see a ton of other familiar faces. As we started heading out and hitting places like Boston, New York City, D.C, Ohio and California, it was a whole new world and it was kind of mind blowing to see people that we had never seen before, totally into our band, up front and singing along. I think once we started playing outside of our area and our first 7” was released, that’s when I really started to appreciate what we had and what we were becoming. ALL THE BANDS YOU HAVE BEEN IN PUSH THE STRAIGHT EDGE MESSAGE. FIRST OFF, WHAT APPEALED TO YOU ABOUT STRAIGHT EDGE AND WHY DID YOU FIND IT IMPORTANT TO STRESS THE MESSAGE?

I think to start, I was never all that attracted to drugs and alcohol. I knew it’s dangers and although I dabbled with it very lightly as a kid, I knew what it could do and I had no interest in seeking any serious involvement. Seeing kids in my Junior High School that were really into partying, drinking, smoking, taking drugs, talking about acid was also a huge turn off. The whole Heavy Metal Burn Out thing was at an all time high in 1986 and 1987 and I was surrounded by so many kids that were into that, but it never appealed to me. Some of the music was cool, but that scene, the long hair and the whole aesthetic was just not me. Not to mention, a lot of those kids that were into that scene were not exactly friendly or welcoming. So I think I naturally rebelled against all of that and when I started hearing about Straight Edge bands, hearing the music and seeing photos of the bands, I felt an instant connection. I looked at these people as people that I had something in common with. I was into hardcore and punk, so I liked the loud, fast, hard, aggressive music, but I didn’t want to look like a mohawk punk or hang out on a stoop drinking beer and smoking pot. Seeing photos of bands like Youth Of Today and Bold, really cemented the connection. Hearing their lyrics, it all just made sense and seemed to naturally define who I already was.

Years down the line, when I actually started doing Mouthpiece and into my other bands, the messages that I picked up on from all those early, influential bands, stuck with me. I guess I felt so inspired and moved by them, that I felt compelled to carry it on and continue to spread the similar messages.

WHEN MOUTHPIECE STARTED TO TOUR IN THE 90’S, WHAT DO YOU THINK WERE THE ADVANTAGES AND DISADVANTAGES OF TOURING IN THAT TIME FRAME?

Well at the time we just didn’t know any better, we basically copied what we had heard other bands before us had done. It was all about getting on a phone or writing to kids all over the country, making connections, setting up what we could with kids we felt we could trust, crossing our fingers and hoping for the best. You hit the road with a notebook full of names and addresses, you brought a map with you wherever you went, you carried a pile of change with you in case you had to make a phone call at a telephone booth and you just made it happen. There was a certain level of excitement about traveling to a place that you had never been before, to see how it would all unfold. I think when you took those risks and they paid off, it felt all that more rewarding.

For kids today, it’s much easier, you can have the entire tour mapped out on a GPS, you can see photos of every club and every area you are traveling to. There is far less element of surprise that goes on today. Whether or not that’s a positive or a negative, it doesn’t really matter; it’s simply what it is. I’m happy that I got to experience it before it was so easy, I think I appreciated it more, but at the same time, I’m grateful that we have things like GPS and cell phones and all these luxuries that simply make things easier.

WHAT IS IT ABOUT HARDCORE THAT KEEPS YOU INVOLVED? WHY DO YOU THINK SOMETHING LIKE STRAIGHT EDGE CONTINUES TO STRIVE IN THE HARDCORE SCENE?

I think it’s just a timeless, classic, honest, meaningful, powerful, important culture and kids recognize that. Clean living is an alternative to what the rest of the word is doing and it makes sense to a lot of kids, so it’s very easy to grasp.

WHY DO YOU THINK STRAIGHT EDGE TOOK HOLD IN THE HARDCORE SCENE AND NOT IN ANY OTHER ALTERNATIVE MUSIC SCENE?

I think it’s taken root within the hardcore scene because the hardcore scene is real, it’s not a facade. That drug culture of the 60’s, 70’s and 80’s has provided us with so many casualties, they just can’t be ignored, reality is reality. Kids have seen what drugs and alcohol can do, it’s been driven into our brains for years now, we’re not new to it’s risks and dangers and we enjoy connecting with like minded people. IN THE EXTENSIVE TOURING YOU’VE DONE WITH YOUR BANDS, WHAT WAS ONE OF THE WORST SITUATIONS YOU’VE BEEN IN?

The positives definitely outweigh the negatives by far, there’s no question about that, but I’ve certainly been in a handful of bad situation with my bands that I’ll be very happy to never experience again. From our first west coast trip where a few of us within the band and within the bands we toured with, got into some heated arguments and fights with one another, to playing a show in Connecticut and having our guitarist’s car windshield smashed out, to getting into arguments with kids on tour, to fights breaking out in Europe over Straight Edge and getting beer thrown at us, to playing a show to 3 people and a dog in attendance, none of that has been fun. As for the best, playing shows to 1,000 screaming, diving, enthusiastic hardcore kids on our first trip to California, to writing, recording and releasing each record, to meeting and playing with some of our favorite all time bands, to traveling the country and the world, all of that is priceless.