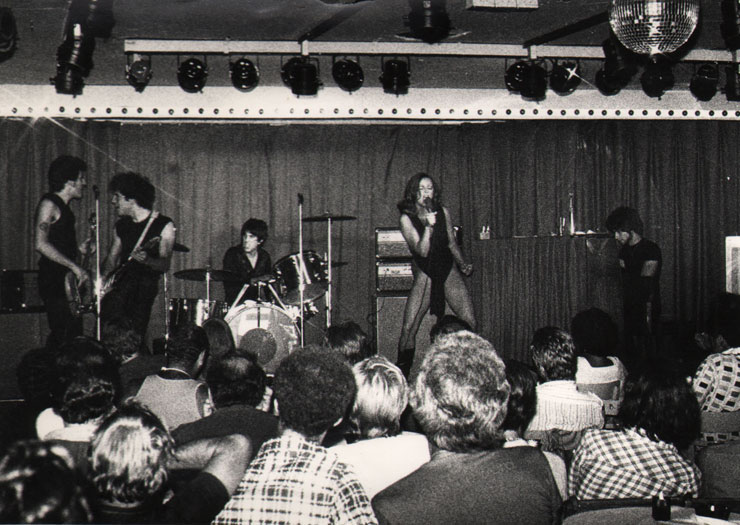 Rock stars, record deals and raging parties—Cherry Vanilla’s done ‘em all and lived to tell about it with love and lucidity. Ms. Vanilla calls herself a “groupie” but embodies a woman working in the music business at the birth of sexual revolution, “when at last a lusty young woman like me could play the sex game the way men had been playing for so long,” she writes in her juicy memoir, Lick Me: How I Became Cherry Vanilla.

Kathleen Anne Dorritie started out DJing in 1960s New York nightclubs and later became Cherry Vanilla in the London production of Andy Warhol’s play, Pork. She worked as David Bowie’s publicist, toured with The Police and entertained audiences around the world. Here, she gives the scoop to Green Room Radio. WHAT ARE SOME OF THE WORST OR WEIRDEST GIGS YOU’VE PLAYED? WHAT WAS SO STRANGE OR MEMORABLE?

The weirdest gig I ever played was probably one at NYC’s 82 Club, in 1975 or ’76.  The recording artist, Robert Palmer, of whom I was a huge fan, came and hung out in my dressing room with me between shows.  He ordered me one Southern Comfort after another, and I was so excited, I hardly noticed how many I’d consumed.  By the time I went on stage for the late show I was smashed.  I remember wearing the sheer black chiffon sash to my costume, tied around my boobs as my entire top, totally revealing my nipples and thinking it looked great.  I managed to get through a few tunes, singing one of them while sitting on some old guy’s lap at a ringside table.  Then my guitarist, Tom Morrongiello took center stage to sing a tender ballad we’d written called Keeps On Snowing, while I sat at the edge of the drum riser next to the amps.  But I was so drunk I actually feel fast asleep there, and they had to wake me up to finish the show.  I was in a total fog, not sure if I was really on stage or just dreaming, but somehow I finished the show.

Robert Palmer disappeared before my encore, probably feeling guilty and thinking I was going to scold him for plying me with so much booze.  But in reality I was just dying to continue the make-out session we’d started backstage and invite him back to my loft for a sleep-over.  I always looked forward to the day when we would meet again and have a good laugh over that night, but we never did see each other again.  Robert died in 2003, so it was never to be.  It will always stand out as one of my weirdest, but also one of my most memorable gigs, not only for the embarrassment and humiliation of it, but for the sheer punk rock, rock and roll romance of it as well.  Thank you, Robert Palmer, wherever you are.

WAS THERE A MOST NOTORIOUS NY VENUE FOR YOU?

Well, for me that would have to be none other than the notorious Trude Heller’s, on Sixth Avenue and Ninth Street in New York’s Greenwich Village.  It was early in my rock career, around 1975, and Trude Heller herself owned and ran the place.  During the 1960’s all kinds of incredible artists played there, from Otis Redding to Goldie and the Gingerbreads to Ahmad Jamal.  Trude herself used to tell me about Lenny Bruce playing there, with Marilyn Monroe in the audience.  And she’d flatter me by telling me that I was a combination of them both.  Trude was a dyke and she was sweet on me.  I wasn’t interested in having sex with her, but she intrigued me.  She was a Greenwich Village legend and a Fire Island one too.

As for the club, I loved it.  It attracted the widest assortment of patrons. And there was something about how it sat a bit above street-level and had that big wrap around corner staircase and awnings, that made it seem so NYC cinematic.  Even before I ever performed there, I was attracted to the place.  You would never know what you would find there, but you could feel comfortable just popping in and hanging out for a while, have a drink at the bar or whatever.  It wasn’t really known as a rock & roll club per se, it was known more as an iconic Village landmark, no matter what went on inside of it or what kind of music or laughter was emanating from it. Trude booked me over and over, and allowed me to choose my own support act too.  I always chose Lance Loud and The Mumps, ’cause I just found Lance and the band and Lance’s whole family to be really down to earth, while at the same time being so bright and progressive and cool.  I even did a show at Trude’s once, on a night when my whole band walked out on me because they were demanding more pay, which I didn’t have to give them.  Michael Kamen got a bunch of musicians together and we did a show that was totally improv … with the drummer showing up mid-set, introducing himself to me for the first time, setting up and finishing out the night with us … everyone playing original Cherry Vanilla tunes none of them had ever heard before, except for Morrongiello, whom I’d just instantly promoted from roadie to lead guitarist.  And typical of a true Trude’s audience, many of them thought it was my finest hour. WHAT WAS YOUR BEST GIG & WHY?

My best gig was at an outdoor music festival, somewhere in the countryside of Holland.  It must have been around 1977, ’78.  And it was my best because it was my biggest, and because it was such a beautiful, warm and sunny day.  And because I became the headliner by default when Chubby Checker didn’t show up.  I’ll never forget the vision as our van approached the setting.  I had never ever seen so many bicycles lines up in one place in my life.  I wondered how anyone would ever find theirs at the end of the day and marveled at the fact that not one of them was locked up to anything at all.  In New York, they would be packed into a truck and sold for dope or rent money.  The stage was huge and the natural bowl-like setting was filled with what seemed like an endless sea of people, numbering somewhere in the thousands for sure.  It was the closest I ever got to what it must have felt like to play at Woodstock or Monterey Pop.

The Dutch acts went on first, then us, because we were from London and signed to a label.  We went down a bomb, as they would say back then, meaning great.  But when Chubby still hadn’t arrived to top off the roster like he was supposed to, they asked us to go back on in Chubby’s place and do our set again.  It was fabulous in a way, ’cause we could just have a totally good time with this one, knowing that the first had already gone so well.  The crowd was amazing.  Nobody seemed upset in the slightest that it was us again instead of Chubby Checker.  In fact, they seemed happy about it.  And we were so thrilled, we could have played on for hours.  The sun was setting.  The sky was pink.  And we had just saved the day.  We drove out of there with a sea of bicycles rolling alongside of us, raves being shouted at us, hands being waved and kisses being blown in both directions.  And it was Holland, after all, which meant there was plenty of hashish on hand the whole time.  It was a psychedelic technicolor memory in the midst of a mostly dark and speedy Euro punk-rock scene.  I’ll never forget it.