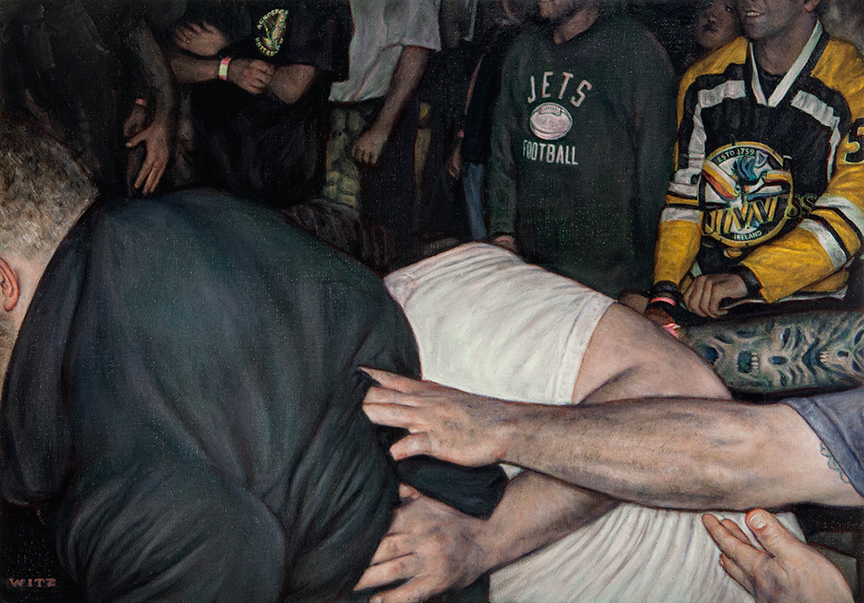 Dan Witz is a street artist and realist painter based in Brooklyn, New York who recently gained recognition among the Punk and Hardcore crowd with his series of paintings capturing the ferocity and energy of the mosh pits at New York City Hardcore shows. Based on the action at gigs by Hardcore titans such as Sick of it All and Vision of Disorder, the paintings are tight and meticulous in detail, but still manage to grab both the unpredictable nature and palpable physical threat of the usual scrum of bodies found on the dance floor at these action packed shows.

WHEN YOU WERE A PART OF THE DOWNTOWN MUSIC SCENE IN NEW YORK DURING THE EARLY 80’S, WERE YOU PART OF THE NO WAVE SCENE OR DID THAT WHOLE THING ALREADY IMPLODE BY THEN?

I was a little after the No Wave scene. I graduated art school around 1980. I came of age during Lydia Lunch, Mars, DNA and all that stuff. That’s the stuff that got me interested in playing. I was disenchanted with the future I saw ahead of me as an artist making things to sell to rich people. I didn’t want to spend my life doing that. Back then, to be exhibited and to gain any traction in the art scene, you had to be a white guy in his 40’s. When I saw that, I said “Screw art! Let’s start a band!”

A lot of my friends became performance artists and made films and did installations and then there was a group of us that formed quasi-punk bands. The only requirement to be in these bands was you could not be a good musician! THAT’S THE GREAT THING ABOUT THE NO WAVE THING AND THE EARLIER PUNK AND HARDCORE STUFF; CHOPS WERE LOOKED DOWN UPON!

Yes! And that suited me fine because I knew nothing about music. I didn’t even play music in high school. I got a farfisa organ and started fooling around with that. I got a bunch of keyboards that I bought for nothing that constantly broke on stage.

SO WHAT WERE THESE BANDS LIKE? WAS THERE SONG STRUCTURE OR WAS IT TOTALLY ABSTRACT?

We weren’t free from song structure. There was even some melodic stuff. We were rebelling against what you would call the “New Wave” music of the time. It was dissident, noisy and excruciating. We tested the audience. That’s what we specialized in!

AT THE TIME YOU WERE PLAYING OUT IN NEW YORK, WAS THERE ANY CROSSOVER INTO WHAT WAS THE BURGEONING NEW YORK HARDCORE SCENE OF THE EARLY 80’S?

We were aware of the Hardcore bands and played at the same venues like CBGB’s, but there was no hybrid or cross-pollination with that music. We were constitutionally incapable of respecting anyone in music, especially if they were professional. But the Hardcore guys were not professional at all, so I had nothing but respect for them. A lot of people I knew were into Hardcore, but it didn’t suit our – I hate to use such a fancy word – aesthetic. We were coming from art school.

HOW DID YOU GET INVOLVED IN PLAYING MUSIC WITH GLENN BRANCA?

There were about four or five people like Laurie Anderson or Rhys Chatham or Elliott Sharp or John Zorn who would use this labor pool of these young, hungry and down-and-out musicians for their touring companies. I ended up in Glenn Branca’s ensemble which was great because he was my favorite out of them. This was in ‘82 or ‘85 or something.

We did Branca’s Symphony #3. I was twenty-four on the stage at the Brooklyn Academy of Music and we were all like “What the fuck are we doing here?” That was my experience of the intensity and rule changing energy of music. We got to tour Europe and play everything from gnarly punk clubs to opera houses. WAS THIS AROUND THE SAME TIME YOU STARTED DOING STREET ART?

Like I said, I was really disenchanted with what kind of art was around in museums at the time. It was boring, intellectual and highly elitist. So, I started doing street art in 1978. It was anonymous and not marketable. That was my way of doing an art form that satisfied my need to be rebellious. I wanted to skirt the whole money value paradigm that art was all about at the time. Art was looked at as an investment and a commodity and I wanted to change that, so what better way than to make art you couldn’t own or sell? I guess it’s kind of ironic because thirty years later, the whole street art thing became marketable. Back then, it was looked down upon. People would say, “What’s wrong with you? You can’t get a gallery?” Keith Haring came along and started getting recognition for that kind of stuff and that’s when I really went underground. I very consciously changed my style so that I wasn’t in that marketable world of what eventually became contemporary art.

SINCE NEW YORK HAS THIS RICH HISTORY IN REGARDS TO PUNK AND HARDCORE, DO YOU FIND IT STRANGE IT TOOK YOU UNTIL THE 2000’s TO FINALLY START DOCUMENTING IT WITH THESE MOSH PIT PAINTINGS OF YOURS?

It is kind of weird, right? I come from a academic, realist painter tradition where you do still lifes and landscapes; big compositions with lots of people. These twenty foot high paintings that you walk by on the way to see a Monet or Picasso. That was the highest aspiration for someone like me. So, I thought, “What could I do as this punk rock street art guy that is like that?” and that’s when I came up with the idea for these paintings.

HOW DID YOU START OFF DOING THESE MOSH PIT PAINTINGS?

I started out taking photographs at concerts and then using a slide projector to project the images and that process took forever. But when Photoshop came along and I started to understand how to use that, that’s when I was able to put these things together in a satisfying way. I can go to a concert and take two or three hundred pictures and combine them all into one composition. The paintings aren’t based on just one photograph. It’ll take me months just to put together the composition which is something I really enjoy doing. It’s very intricate and like putting a puzzle together. NOW YOU ARE DOING SIMILAR PAINTINGS OF SCENES FROM RAVE PARTIES?

I really put a lot into my New York Hardcore painting series; which was my last show in 2014. I got tired of painting white guys with tattoos, so I was really happy to paint women, people of different colors and people wearing weird costumes. I’m much more of a believer in the culture of Hardcore and I come from similar backgrounds and the rave thing is less about me and I like the challenge that entails. There’s moments at those raves where people leave their bodies and you can sense it. It may be drug induced, but it’s endlessly fascinating to me.

To get a Hardcore composition, I have to be in the mosh pit and in the mix of violence. With the rave thing, it’s much more voyeuristic. I still insinuate myself into this very physical mass movement of bodies. I’m woven into them while I’m photographing them, but the mosh pit is much more violent and physical. YOUR MOSH PIT PAINTINGS HAVE GAINED YOU A LOT OF ATTENTION IN THE PAST FEW YEARS. DOES IT GET FRUSTRATING THAT PEOPLE DO NOT KNOW ABOUT THE ENTIRE HISTORY OF YOUR WORK OR ARE YOU JUST HAPPY TO GET THE RECOGNITION?

I know that I’m lucky that I can support myself as an artist and I shouldn’t complain, but whatever I end up doing is always frustrating and never cooperates with how I want it to go anyway. There’s a lot to be said for being known. I can go to a band like Agnostic Front and they’ll be like “Dude, that guy can come to our concert and photograph us for sure”. So, it gets me respect. It’s the same thing with the raves. They usually don’t like you taking photographs at raves, but these people are happy to have me there because now their product is associated with me. As far as street art goes, I’m on the down low with that. The majority of my creative time is given to street art believe it or not. But yes, there is a strange dichotomy where people just know me by the mosh pit paintings or my street art and vice versa. I like that because it’s so against good sense if you want to have a career as an artist. It’s so subversive to this whole thing of developing this one brand your whole life. That to me is the death of the art and it’s what I’ve rebelled against my whole life. I’m doing other paintings now that aren’t street art and aren’t mosh pit paintings; they’re just these weird other things. That’s always what I’ve done. It’s not a good business plan! But you could say making the mosh pit paintings isn’t a good business plan either because they take so long. I can maybe do two or three a year at the most. DO YOU HAVE A REMEMBRANCE OF WHEN TAKING THE PHOTOGRAPHS FOR THE MOSH PIT PAINTINGS GOT A LITTLE HAIRY?

Every show has a moment I look back on with a grimace. I went to a concert at Saint Vitus Bar near me in Brooklyn recently with this casual attitude like “I’ll just bring my camera and take some pictures.” The first two or three bands came on and I got a few pictures, but then the Long Island Hardcore superstars Vision of Disorder came on and the place flipped out. I was pressed against the wall and there was no escape. That was a rough one for sure. But I can blend in well at those shows because of the way I look and also, by doing street art, I’ve developed this ninja-like presence where people can’t see me. I’ve been using that when I do the mosh pit things; even with the raves too.