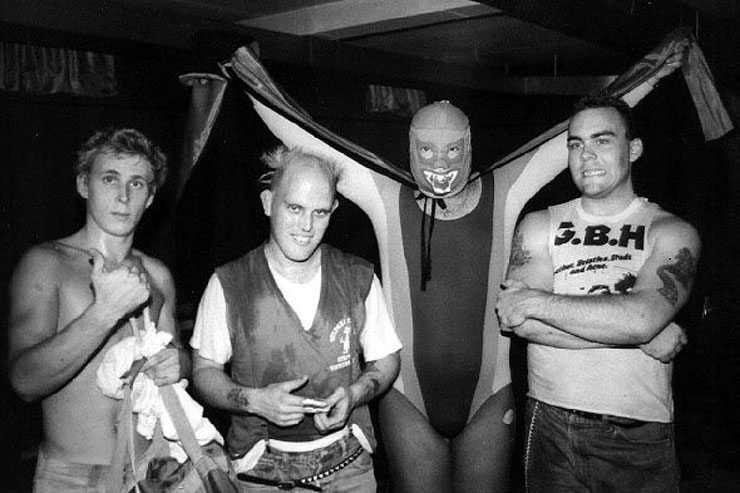 Funk and punk may share three letters, but in 2016, they feel disconnected. In a world where the Red Hot Chili Peppers made a mainstream career off slap-bass laden odes to California, it’s easy to forget that funk was a viable influence in both punk and hardcore’s earliest forms. Why? Well, funk and punk are seemingly unrelated genres at first glance, but they share the throughline of rhythm, specifically the strength of the downbeat. Speaking in funk terms, George Clinton has repeatedly said, “it’s all about the ONE.”

For punk, one of the earliest examples is the pulsing rhythm of the Buzzcocks’ 1978 track “You Tear Me Up,” often cited as a proto D-Beat track. A year later the Damned expanded on that sonic template, employing a similar beat for “Love Song,” that many consider as the blueprint for hardcore’s fast beat. Wait, what does that have to do with funk? Speaking to the speed of punk, nothing, but one of the demarcations of hardcore was the breakdown, which created a dramatic tempo shift and heaviness that taps the into the repetition and impact of funk music.

Later, funk’s heavy template would be introduced into hip-hop via sampling and the patterns of drum programing. While funk music may not be responsible for the “mosh part,” its impact on the punk and hardcore was paramount, before it was co-opted by countless funk metal, punk funk, nu-metal, and other outfits looking for a groove. D. Boon and the Minutemen; photo by Edward Colver
If we trace hardcore punk’s relationship with funk, the easiest line to draw is deep in the heart of Texas, where in 1979, the pioneering act the Big Boys formed, just a year before another funk infused band from San Pedro, CA, named the Minutemen. Informed by a breadth of influences including funk, UK punk, dub reggae, and rock, the Big Boys were one of the first American hardcore punk bands to embrace funk and infuse it into their sound. For the Big Boys, it was just another color in their quiver, contributing to a larger canvas of influence—an interest they shared, from their love of music.

“We skated to Ohio Players, Shotgun, Slave, etc., so when the band started up , it was a given,” said Kerr.  “Also, at that time  and for the most part here in Texas, “punk” meant doing what you wanted—no rules. That first Gang Of Four record rule,  but so did PigBag, Rip Rig, and Panic. In all honesty it was all over the map as far as influences go.” Gang of Four, 1980; photographer unknown
In the UK, Gang of Four are cited as the seminal source of funk influenced punk, but they weren’t only ones flirting with the sound, as the Mekons, X-Ray Spex, PiL, and others also employed the tenets of the genre. And of course, who could forget the UK #1 smash in 1979, “Hit Me With Your Rhythm Stick” by Ian Dury and the Blockheads.

Oh, let’s not forget that the proto-punk of the MC5 and Stooges fucked with funk or that NY bands from Blondie and the Talking Heads built their brand of mainstream “punk” with funk, as well as a good chunk of the bands on the Brian Eno produced “No New York” compilation. All of these may or may not have influenced the Big Boys, Minutemen, Meat Puppets, Code of Honor, and other American hardcore punk acts, but what’s undeniable, is that flirting with funk lead to the formation of new genres of music, informed by punk, but more profitable. For better or worse, the Meat Puppets and Minutemen birthed not only the Red Hot Chili Peppers and Jane’s Addiction, but also Primus and even Phish. Fuck, that’s terrifying. But, when you look at how the originators mashed up sound, it’s a lot less offensive, if we’re going to throw objectivity out the window and operate on the assumption that the Big Boys > Than the Chi Peps, and they are. Kerr himself recalls RHCP with admiration, “One of the early Chili Peppers shows was opening for us , and they were straight up James Brown—that was pretty great!”

Before it became fashionably offensive to mix slap bass with downtuned riffs and suburban, backwards fitted hat angst in the ‘90s, funk was a viable sound and pillar of punk that traveled from NY to the UK and back, as the advent of hardcore happened. Long after the Big Boys and Minutemen broke up, the tasteful fusion of punk in hardcore continued with Firehose, Big Chief, Beefeater, Pylon, the genre shifting Saccharine Trust, Greg Ginn’s post Black Flag project Gone,  and a band you may have heard of from Washington, DC named Fugazi.

OK, the princes of $5.00 shows didn’t boast an overtly funk approach, but the native sounds of Go-Go music were implicit in their rhythmic choices, and of course, Go-Go was a informed by funk. Even though Fugazi’s musical journey began by not so much as renouncing hardcore, but hitting reset on it, the band dug back as much as they looked forward, dipping into the canon of music similar to the roots of the Clash, The Ruts and even the Minutemen, best exemplified by this live version of “Joe McCarthy’s Ghost.”

Yes, the story of funk’s friendship with punk and hardcore took a weird turn in the ‘90s, which we don’t need to recount—especially the occasional thwack of the bass strings, intermittently strewn through ‘90s hardcore releases (I’m looking at you Nick Turning Point). But can funk and punk smooth things over and hang out again? Ventura, CA’s now defunct act Dry Rot—who were quite prolific from 2007-2009ish—certainly made the case that funk isn’t exclusive to post-punk revivalists and that one Franz Ferdinand track that sucks in the 2009 track “Mass Love,” among others. Regardless, funk shouldn’t be a four-letter-word in hardcore punk.