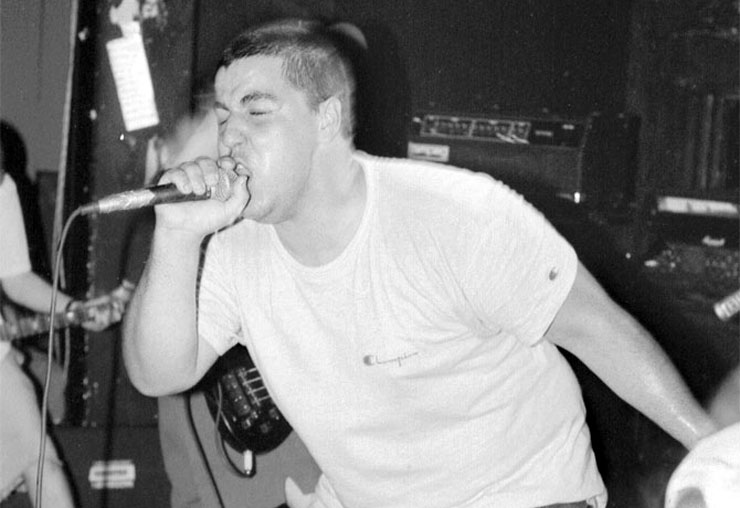 Charles Maggio was the vocalist for Rorschach, a band synonymous with the Hardcore Punk scene cultivated at the Lower East Side culture center ABC No Rio in the early 90’s. Along with the groups Born Against and CItizen’s Arrest, Rorschach replaced the tough guy posturing the New York Hardcore scene was known for at the time with a vibe that might have been less physically menacing, but was sonically brutal in its approach. In doing this, Rorschach unconsciously trumpeted in a new era for the east coast Hardcore punk scene both musically and aesthetically.

Green Room Radio recently found Charles in his native New Jersey to talk about the extensive touring Rorschach did in their time and the highs and lows that came with it.

RORSCHACH WERE A BAND THAT DID EXTENSIVE TOURING OF BOTH THE US AND EUROPE. WHAT WAS THE INSPIRATION TO GO ON SUCH GRUELING TOURS?

Those tours were only grueling in retrospect. Adam from Born Against and I booked the 1991 tour together. We were so into the idea of playing to every punk kid in the country. We wanted to play within five miles of every alienated hardcore kid in every podunk town in the United States. I was under the delusion that booking this tour would be some sick twisted version of the movie Field Of Dreams: “Play There and they will come”. Unfortunately we got there and quickly realized why no one played there. No one came.

HOW LONG WERE THE LENGTH OF THESE TOURS?

The 1991 tour with Born Against was eleven weeks long. We left Memorial Day weekend and played the last show on August 17th I think. Almost an entire summer. 17,000 miles were put on our vans. We went from New Jersey to Miami to San Diego, California to Bellevue, Washington and back east through Eastern Canada, The 1992 Europe tour was eight weeks long. Eleven countries I believe and the 1993 tour was eight week long also.

RORSCHACH ARE OFTEN ALIGNED WITH THE HARDCORE SCENE THAT WENT ON AT ABC NO RIO IN THE EARLY 90’S; A SCENE THAT WAS VERY STRINGENT IN ITS GRASSROOTS AESTHETICS. WERE THE METHODS YOU TOURED AND SET UP YOUR SHOWS WITH A WAY OF GETTING THAT DIY ETHIC OUT TO A HARDCORE SCENE THAT YOU FELT WAS GETTING WATERED DOWN AT THAT POINT IN TIME?

If it was, it was not conscious. I was a painfully untraveled, uncultured New Jersey dolt. I delivered pizza and lived at home. My job would be there when I got back; so would my bedroom. I just wanted to see the country and sell records and play shows If we spread the DIY ethic it was purely a side effect. Anyone on that tour would tell you I was a bit stubborn. When promoters asked Adam or I if we had a guarantee we would say “Yeah, we guarantee you we can multiply by five”, when they responded puzzled we said, “If there are eight people at the show, we know there will be $400 at the door”. This was usually received with an uncomfortable laugh. We were a week behind Fugazi on a portion of the 1991 tour so any ethic we had would have already been firmly put in place before we got to some of these places. ON THAT FIRST TOUR WITH BORN AGAINST, OUT OF ALL THE SHOWS YOU BOOKED, HOW MANY ACTUALLY HAPPENED?

We played sixty-seven shows in seventy-six days. We booked seventy-six shows knowing some would fall through. Our Seattle show was shut down by the cops after a skirmish between some local bar patrons and the punks resulted in gunfire. Our show in Augusta was cancelled because the cops had shown up at a show the night before, but we later found out it was cancelled because the guy never advertised it. So, we went to the promoters apartment and told him he owed us fifty dollars a band, and held his answering machine hostage until he paid us. Answering machines were worth more than one hundred dollars back then.

WERE THERE ANY SHOWS ON THESE TOURS WHERE AS SOON AS YOU GOT THERE, YOU THOUGHT “MAYBE THIS WASN’T A GOOD IDEA?”

We almost called the cops on a show we played in South Carolina with Assuck in 1993. It was a house show that was getting a bit violent and had some sketchy gang types causing trouble. Although, we did here such quotes as “Hold my purse, I’m going into the pit!” and “Everyone move the pit into the kitchen!” at that show, so we are glad it happened. The reality was that every show we played was in a sketchy part of town. That’s where the punk clubs were. Those same areas are nice neighborhoods now in a lot of places. We tried not to deal with sketchy promoters, but sometimes they were hard to avoid. WHAT IS YOUR ABSOLUTE WORST TOUR STORY?

There are many. There was the time in North Carolina that someone tried to break into the van while two members were sleeping in it. Or in Richmond when I was woken up in the van by a guy with a prostitute who decided it would be pretty awesome to use the bumper of our van to support their activity, and then loudly argue about payment, which eventually led to a deep voiced very convincing pimp working it out with the client. I of course remained in the van praying to remain undetected. There was the place we stayed in Albuquerque that did not have a functioning bathroom so we were told if we need to go the bathroom to “Just go to the corner, there is a 24 hour gas station there.”

WRAPPING IT UP, WHAT DO YOU MISS AND NOT MISS ABOUT THOSE DAYS OF TOURING?

There is little I miss. The last twenty-three years have softened me up a bit. I have little tolerance for ineptitude, which seems to run rampant in the world of being in a band. I miss all the record shopping we did, but those days can’t be relived in today’s world.