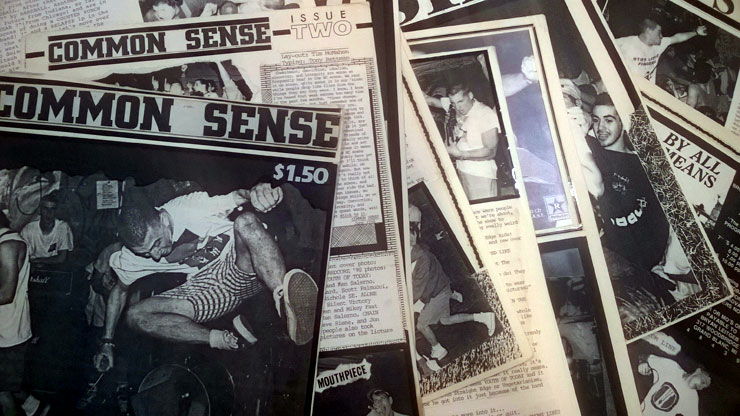 Long before the music of punk bands from every stretch of the world were nary a keystroke away, the lines of communication in the scene ran on a vague universal consciousness based on speculation, assumption and an occasional fanzine chucked into a mailbox. For a kid who wanted to do more than play football in the pit, these ‘zines were the only means you had to know more than who was making out by the pinball machine during a 7 Seconds show. Finding out about anything from a fight that happened at a show in another city last week to how many seven inches some band put out eight years ago all came from this same hazy party line. Whether it was a musty old fanzine found behind a record store counter or a new issue of Flipside or Maximum Rock ‘N’ Roll freshly placed in a rickety magazine rack, this was the way history was learned, networks were built and record collections grew. Besides the obvious visceral appeal punk rock would have on an angry young man, the thing that really got me was the Do-It-Yourself aesthetic of the scene. The fact these bands could tour the country, put out records on their own dime and spread the word of their twisted gospel was mind blowing to me. But the one aspect of the whole operation that really made me want to be a part of it were the fanzines. As a ten-year-old kid not allowed to go to shows yet, the ‘zines my older brother brought home were a portal into a world I desperately wanted in on. When I was finally considered old enough a few years later to attend shows, my consumption of these things grew rapidly. They were cheaper than buying a shirt at a show and there was always some do-gooder fanzine editor walking up to crowds of punks asking ‘Wanna buy a ‘zine?’ And just like weed usually leads to stronger stuff, these publications more or less started an addiction to trying to mass every punk record ever made. ‘Zines became a buying guide to what cool records were out and since most stores still didn’t stock many of these titles back then, the only way to get them in your backwards burg was to stuff an envelope with well concealed cash and wait by the mailbox for the goods to arrive. Many school nights were spent scouring the latest ‘zines to see what little money I had was going to be spent this week. To see an ad for a new seven-inch by a band you heard of was a give in; you had to have it. But the exciting stuff was to order something by a band you knew nothing about. If the ad looked right or a member of the band was wearing the shirt of band you liked in a photo, it was a sure bet it would be up your alley. A lot of money earned from washing dishes or mowing lawns went down the toilet to clunker records and demos, but to stumble upon a band from out of nowhere that blew you away was the real payoff. To this day, some of my favorite all-time Hardcore bands never managed to put out vinyl in their time of existence. We’re talking bands like Brooklyn’s Altercation, Southern California’s Pushed Aside and New Jersey’s The Shock Mommies and many more lost to the deep recesses of time.

Finally, at the age of fourteen, I decided to throw my hat in the ring and start a fanzine. What did I have to lose? I figured it would put me more in touch with this scene I loved so much at the time. And who knows? Maybe years from now, some kid might be digging through a dust caked milk crate in some used record store to find my fanzine and I could provide the answers to some of his burning questions on punk times past. How could I resist? The two fanzines I aspired mine to be like were from California: Ink Disease and Leading Edge. The writing in both mags was exceptional, but it was their clever use of cut and paste layout skills and typesetting that befuddled and interested me, but where to start to make my ‘zine look like that was totally alien to me. Luckily, I decided to take a class in Graphic Design at the local Vocational School for the mere fact it allowed me to leave the school campus for half the day; it seemed like a sweet deal. The first couple weeks of that class were a revelation. Very quickly, the resources of doing a decent looking fanzine were at my disposal. I learned how to shoot half-toned photos in a darkroom and do layouts, but the real epiphany happened one day when I was in the supply room. On the floor was a box full of rub-off letters, background graphics and border tape. It was as if this box was some sorta offering from the ‘zine gods. I hastily scooped up the entire remnants of the box and shoved them into my backpack. I could’ve asked the teacher if I could have it, but that shit just wouldn’t of been Punk, right? The combination of having these tools at my disposal sparked myself and my soon to-be-co-editor Tim McMahon to try to navigate these recently pilfered tools the best we could. We both decided to nip both of our individual fanzine projects we had going at the time in the bud and start anew on a collaborative effort. Where a lot of kids High School Punk Rock existence consisted of drugs, booze and making out in the backroom of some sleazy club, ours was a blur of shows, stage dives, letter writing, dubbing tapes, transcribing interviews and digging through boxes of letraset at the local art supply store to find the font used for the SS Decontrol logo.   While Tim worked night and day on replicating the layouts that blew us away in the aforementioned fanzines and I ran up ridiculous phone bills interviewing bands from Southern California to Ohio, we wondered how we could get this thing printed somewhat professionally, but on the cheap. A fanzine editor from Seattle we were in correspondence with just had the latest issue of his publication printed on a newsprint web press and assured us it wasn’t a bank breaker. I rummaged through the yellow pages until I found a print shop ninety minutes from us which gave me a quote well in the budget we accumulated cutting lawns and bussing tables on weekends.

Since neither Tim or I were old enough to drive yet, my mother had to drive us down there to pick up the issues. It wasn’t until the moment our two pip squeak asses walked into that place and told the receptionist we were there to pick up our ‘zines that I realized this whole situation was very unusual for all parties involved. The salesmen I had been speaking with the whole time of the phone looked both shocked and almost pissed off when he took a look at us, but he still laid on the sleazy charm before we left to consider them again when we do our next “newsletter”. The first issue of our ‘zine Common Sense was made available for purchase at a Token Entry show on April 16, 1989. Walking away from that show with pockets full of sweaty one dollar bills and the approval of our peers on the scene was an elating feeling. It was also pretty cool to send those mags out via the U.S Mail and accumulate allies around the country. To come home to a mailbox heaving with manila envelopes filled with ’zines, tapes or records sent by kids similar to me who lived somewhere far away was a unique gratification I’m sure the rest of my classmates knew nothing about. And I really liked that. Knowing everyone in this well spread out group of kids was staying inspired enough to produce these unique objects was enough to get me through another day of my pathetic High School existence. People everywhere from California to Connecticut to Texas were constantly writing letters back and forth to Tim and I. There was a constant flow of communication going on that seemed so fucking important. It was almost as if you didn’t mail out that ‘zine that day, the whole thing would end tomorrow.

Looking back on the fanzines I made as a kid is a weird rush of nostalgia and utter fucking embarrassment. But beyond the dissing of bands who really didn’t deserve it and the excessive use of the word ‘boyee!’ used in record reviews I wrote, there lies a pride in knowing I was a part of something that most kids weren’t privy to. Not only that, but it yielded me friends and artistic collaborators that I still deal with almost thirty years later. And if that doesn’t say something about the power of the ‘zine, I certainly don’t know what does.