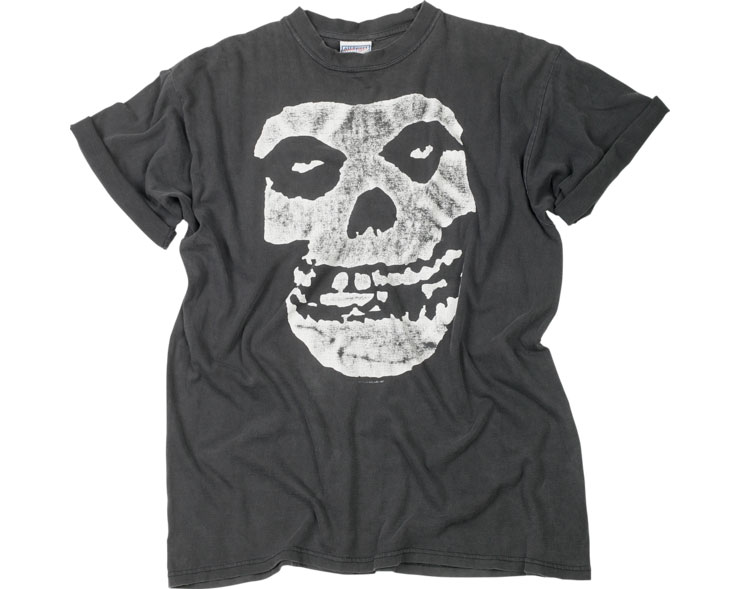 Though they were signed to major labels their entire career The Ramones were never a commercially successful band. Legends? Yup, but saleswise, they only have two Gold certifications from the RIAA–one coming as recently as 2004. Whatever, they’re arguably the most iconic punk rock band ever. Knowing that they could only generate money by rigorous touring, the band quickly discovered another revenue stream: T-shirts. Assisted by Arturo Vega’s “crest” design, Ramones T-shirts quickly became the band’s main source of income and one of the most recognizable shirts ever to exist. Their total album sales are a fraction of their merchandise totals and the shirts continue to sell, long after their break up. The merch did more than just make them cash, it turned their logo into an actual icon that symbolized more than just catching, hook filled, and slightly frazzled punk rock. It’s hard to imagine that the model The Ramones inadvertently created in the ‘70s is how most bands survive now, but it’s important to realize that merchandising for musicians was still a relatively new idea. Tour T-shirts still weren’t commonplace in the ‘70s, with only the Rolling Stones and Grateful Dead truly mastering the idea. Kiss took heat for putting their name on any product they could possibly make, but now that’s just how you make money. Gene Simmons’ ego might be larger that most planets, but he was dead on about Kiss being a brand, not a band and that led to a lot of profit, no matter how bad their albums eventually got.

Modern musicians can attest to this model being extremely relevant now, with physical sales a fraction of a fraction of what they were even a decade ago and good luck flipping your streaming royalty check into anything more than a burrito. But this idea of merchandising was common to punk and hardcore bands of the ‘70s-‘90s, as they knew they couldn’t rely on record sales to survive. Fuck, some of the most influential punk bands that ever existed only released one 7” single, in a pressing of less than one thousand copies. For punk rock to exist without major label support, bands that aspired to play more than their tristate area had to merchandise themselves and rely on direct sales to avoid being chained to a day job… but they still usually had to anyway. Often crudely drawn by band members and fans and printed in limited quantities, the shirts being sold by many punk bands became more personal than the mass produced 4,000 color tour shirts sold in arenas. There were no art directors, professional illustrators, or even outside designers and many times the shirts were only one color, because that’s all that was the easiest and cheapest way to screen a shirt. Instead of these low priced, lo-fi shirts becoming disposable, they became collectable: badges of honor recalling a time and a place. That one time The Misfits played Detroit, a Black Flag design that they only sold at one show before moving to the next round of artwork, or the sole shirt of a band that broke up shortly after their first tour. The reason these artifacts have more importance than an old Budweiser shirt is their stories and nostalgia. The limitations bred a unique aesthetic that recalls a time and place. More than just a way to put gas in the tank and food on the table, punk shirts became part of the way we communicate—part of the visual language of punk. Need an example? I went to a college fair thing in high school, where I was supposed to learn about a bunch of universities and pick up brochures, but instead, I saw a dude in a Chain of Strength “True Till Death” T-Shirt and immediately ran up and introduced myself. We ended up blowing the thing off to go record shopping. I mean, to have that shirt from 88/89 in the early ‘90s meant you were wired into the scene and were part of it, not just someone who had a shirt of a band from a mall or some head shop you visited on summer vacation. The punk shirt essentially became a searchlight that only those in the know could see.

In hardcore specifically, the band shirt really upped its worth. It wasn’t uncommon to see five young people on stage (and still isn’t to this day) wearing T-Shirts of five other bands. Iron Maiden doesn’t do that shit? They promote themselves. Visually, shirts evolved from stencils, the handmade Ric Clayton Suicidal Tendencies designs, and one color simple designs, to include graffiti, cartoon art, rip-off logos, odd placements and in the case of Wishingwell Records’ / Hardcore Grafix shirts often designed by Pat Dubar of Uniform Choice’s brother Courtney, they’d have print on every part of the shirt because, “it was a better value.” Oh, the sleeve prints that sometimes included slogans such as “No Thanks, I Don’t Need Your Drugs,” looked as awesome as they were kind of awkward. BTW, Courtney ended up doing something more significant that just setting off four-sided T-Shirts, he owns a little clothing brand called Affliction that does OK, or something. The variants, the scarcity, the aesthetic. Hardcore shirts became an obsession to many and a currency to trade and sell. Also, the fit the adolescent budget and the venues rarely took at cut of the sales, so they remain affordable to this day. So yes, we know they’re essential, they’re art, they’re not, they’re cool, but what the fuck is so special about a T-Shirt with a moshing phantom a wooly mammoth or just some type that says a band name, that looks like some cast off athletic tee from a charity run?

Designer, T-Shirt guru, and righteous human behind the “Wonders of Black Flag” Jeremy Dean answered a few questions, in order to fill in the blanks on what makes some ink on a Hanes Beefy T, so damn special. WHAT APPEALED TO YOU INITIALLY ABOUT PUNK SHIRTS THAT RESONATED SO MUCH?

Skate shirts came first, but as soon as you see a punk shirt… holy shit. As much as a metal tee tried to be scary or maybe convey an anti-authority message, the rawness of any kind of punk shirt did it better. Mix that with a skateboard along with the winning combination of, ‘I (think) I hate society” “just because I’m 13 doesn’t mean you can control me” and “ I don’t fit in, nor do I care.’

DO SIMPLE, BOLD DESIGNS WORK THE BEST AND DO YOU FEEL THAT WHAT HARDCORE SHIRTS WERE DOING IN THE 80S/EARLY 90S WERE COUNTER TO MAINSTREAM FASHION?

Simpler is better. It’s almost crazy how the most simple designs still stand the test of time. Subversively so. Like you can wear a BOLD shirt anywhere and look like a decent human being, but it’s a nod to a whole group of how you think or at least maybe used to think. It’s almost like a lot of the 80/90s designs were right in line with fashion at the time. Clean, kind of athletic. Most weren’t shocking really. They would get you less beat up than a skate tee depending of the group of jocks/jerks/dickheads.

Duh, yea. Look at everything PINK is doing. Plus lines like OBEY, Supreme, etc etc etc.

WHEN DID YOU START SEEING STREETWEAR BORROW FROM HARDCORE AND DO YOU THINK IT WAS DUE TO THE DESIGNERS HAVING AN HC CONNECTION?

It really wasn’t until the early 2000s that I started to see it more, but I remember bugging out at Union in the later 90s at a few tees there that had Germs and Circle Jerks references when everything was hip hop at the time. Now you only see HC references. No hip hop. HOW DO YOU FEEL ABOUT THE PUNK X STREETWEAR COLLABS AND DO YOU FEEL THE RIP-OFFS HAVE REACHED A TIPPING POINT?

At this point the licensed stuff had already been Hot Topic-ed to death, really. I think Supreme did their spin nicely with Bad Brains, Misfits, Winston Smith, etc. It’s hard to do that and not have it look like a bad knockoff.

The rip-off thing has been done to death. Hopefully there is someone out there that can continue to do it and make to look fresh and well done. It’s part of the design lexicon at this point. I doubt it will go away.

WHAT’S SO UNIQUE AND EXCITING ABOUT A PUNK SHIRT, OVER ANYTHING ELSE? I MEAN, FOR REAL… THEY’RE JUST BETTER.

The immediacy. The naivety. Most likely they aren’t over thought or over designed. I love the return of the crude drawing and bad type. I know it’s nostalgia but I welcome it.